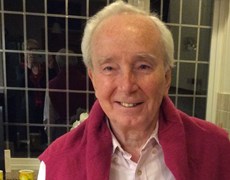 It is with great sadness that I report that Brian Cuff ("brianc") passed away on 25/11/2017, after a long and brave battle with cancer.

Brian learned his craft in the BBC, developing expertise in Studio Capital Projects. From there he went on to found TSL, which installed television studios across the world. Brian retired from TSL some years ago but the company still flourishes: TSL Systems

In retirement he turned his considerable energies to restoring pre-war televisions, and his meticulous restorations were widely admired. He believed in passing on something that the next generation, and the one beyond, could still love and use.

He also assembled a wonderful collection of mechanical music including player pianos, with which he would regularly entertain guests.
You can see Brian in this recording of a lecture he gave at the Royal Television Society. RTS Lecture

We will all miss Brian a very great deal. Our hobby has lost a very fine exponent of the art, and a true gentleman.