I spent this past Sunday afternoon helping MIT students with their projects for the 6.101 lab course. This is an under-graduate course that includes class room teaching and assigned experiments by Prof. Ron Roscoe. On the second half of the course, students are required to complete a project of their choosing.

One such project by students Ben Switala, Daniel Bickerstaff and Camille Kemble, is to build and design an RFID card reader. This is the type of card that MIT students carry for identification.

I had a good time in the lab with Ben Switala as we figured out together how RFID works. Ben had dome some research and found this link: http://www.cq.cx/prox.pl

By the time I left, there was an RFID bit stream visible on the (analog) scope.

The RFID technique reminded me of many circuits, ancient and new, that work on similar principles.

With RFID, an RF magnetic field is supplied by a coil in the RFID reader, and the RFID card gets energized by the it's own tuned coil and responds by modulating the amount of energy it draws from the external applied magnetic field, with a digital bit stream.

An ancient Grid-Dip-Meter tuned to the 125kHz resonant frequency of Ben's MIT RFID card could have read out the bit stream of the card. The grid leak time constant of the dip meter would have to be fast enough to follow the bit stream, with perhaps a 100us bit rate.

If you happened to travel back in time to, say 1915, with your RFID card, and happened to land in a well equipped lab, say at Bell labs, where they were all excited by the promise of Lee DeForrest's triode, and may even have had a Braun tube CRT nearby, you could have verified that your RFID card survived the time travel. You would have placed your card in the field of an LC-Triode oscillator running at 125kHz, while monitoring plate current in the Braun tube. One free hand would tweak the time base motor-generator to stabilize the pattern from the triode oscillator plate current, so you could read the bits on the Braun tube. ( the Braun tube preceeded the modern CRT)

All of these possibilities made my head reel until I settled on the idea that an AM Radio Karaoke setup could be implemented with the same principle as the RFID.

What I mean by AM Radio Karaoke is some means of adding your voice to a received AM radio station signal.

The AM radio Karaoke implementation is as follows: Take a classic Crystal radio, with LC tank circuit, germanium 1N34 detector diode, RF filter 1000pF cap and magnetic earphone and use it backwards, near another radio.

The following photo shows the BP-10 RCA pocket radio from 1940, with it's black lid open. The black lid turns power on and exposes it's built-in loop antenna. The crystal radio is built with a ferrite stick mounted on a plastic frame with the tuning cap which, in turn, stands on a supporting PCB with thumb screw terminals. The 1N34 diode and 1000pF filter cap are both attached to these terminals, and a green twisted wire pair connects the 1:10 impedance matching transformer and speaker. 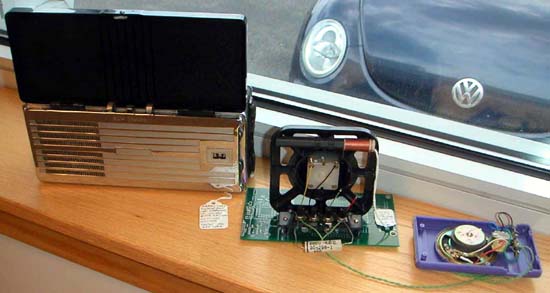 The next photo shows the ferrite stick from the Crystal radio positioned in front of the loop in the BP-10 lid, and is and tuned for maximum interference or attenuationh the received AM signal. The speaker in the purple shell now serves as the microphone input. You speak into the blue speaker shell and your voice modulates the in-coming RF signal. 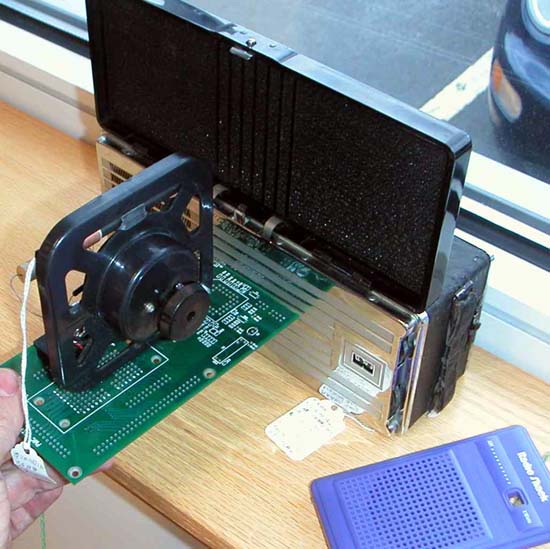 One handy way to tune the setup is to first tune in a station on the BP-10, then place the blue speaker/microphone in front of the radio speaker, while tuning the Ferrite stick  with the variable capacitor in front of the BP-10 Radio loop antenna,. When you hear the classic audio feedback howl, you are tuned in. Then pull the blue/speaker/mike to your mouth and argue/agree with your favorite talk-show host, or sing along with your favorite tune.

Your voice and the radio station sound will both come out of the radio simultaneously. You can only speak into the radio if there is a station being received by the radio, or an RF carrier from a nearby generator is present.

With this setup, you will never be louder than the radio signal because the best you can do is 100% percent modulation, and the incomming station strives to be close to that as possible. But you can be just as loud as the station.

Another way to modulate the incoming AM station RF signal with your voice is to use just the Ferrite coil with the tuning capacitor built as a condenser microphone. Voice on the condenser would detune the Ferrite at audio rate, and add modulation to the station signal that would be heard in the radio speaker.  You could use a styrofoam plate with thin magnet wire zig-zagging through it's surfaced as one plate of the condenser, with conductive plate or screen nearby as the other condenser plate.

This approach is even simpler than the crystal radio. Will someone try it out, and share the results?

What, you want to have even more fun? How about modulating a neighboor's radio signal as it comes into it's long wire outdoor antenna, with your antenna and crystal radio circuit, that happens to run nearby.

This kind of Karaoke trick is something that could have been done since the dawn of radio. Perhaps it was even published in a hobby magazine.

Best regards, and enjoy the fun.

Ben Tongue enjoyed reading this post and sent me patent number 2,539,594 by Robert Rines and Blonder-Tongue co-founder Ike Blonder, where they describe a telecommunication system with the RF power source and modulator are at different locations.

As described in the post above, the RF signal shown in the patent is modulated in the space between transmitter and receiver.

The patent description uses dipoles and wire antennas to transmitt, modulate and receive the signal.

The remainder of the patent can be dowloaded for free from Google-Patents.

Thank you Ben, for sending this interesting patent reference.