Klick here for "all" Lafayette models.
Use the "Advanced search" for limiting by years - to get the later models.

Lafayette is known as a mail-order catalog business with sales outlets in different cities.See company description and the text about these catalogs. 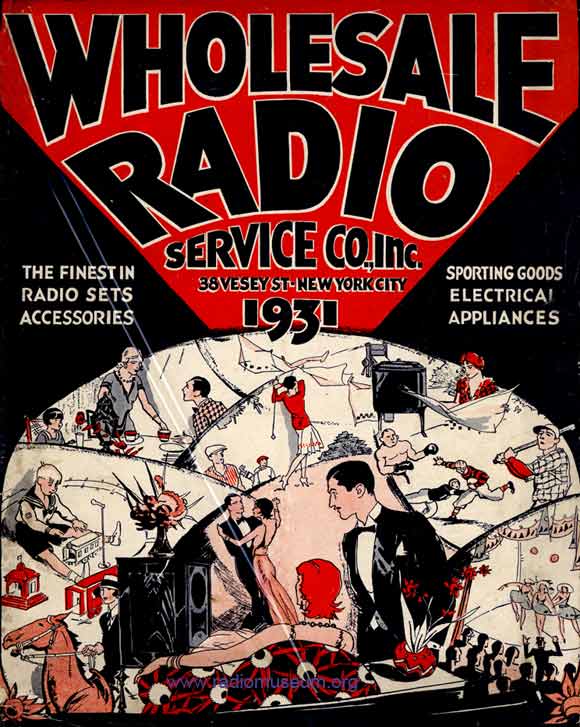 This still unnumbered catalog 1931 shows no Lafayette name on the front cover. The address given for
Wholesale Radio Service Co. Inc. is 38 Vesey Street, New York City as in next year, but the catalog no. 53, 1933 shows 100 Sixth Avenue, New York, N.Y. The next page states: Lafayette "The Bonded Radio".

Since this catalog was most probably distributed in Autumn 1930, we regard the models as for season 1930/31 because they were made and sold in 1930 - and later.

The catalog states on page 2:
"A little over 9 years ago WHOLESALE RADIO SERVICE COMPANY commenced business in a small office on Church Street. The radio industry was in its infancy - growing tremendously fast - and suffering form "growing pains". Concerns would spring up over night, without any code of business ethics, without any desire to give their customers fair, legitimate treatment - and these firms would disappear almost as quickly as they started.
Wholesale Radio Service Company, together with a number of other legitimate radio concerns, clearly say the necessity for restoring the confidence of the public in the radio industry. And so we formulated a business policy - a policy which has been our creed for nine years of remarkable progress - which has been responsible for the tremendous growth of this concern to the point where we are now the largest institution of its kind in the East."

On page 3 they claim to do over 2.5 million dollar sales yearly, having thousands of satisfied customers.