The model FM Jr. is part of the collections of the following members.

After waiting a couple of years with an automatic ebay search, I finally got my Hastings FM-Jr. This FM pocket radio was designed by Richard Florac and made by Hastings Products of Boston Massachusetts, USA in the late 1950's. Florac protected his design with several patents.

Patent US2619589 shows most of what became the commercial version of the circuit. It is interesting to note that part of the claims include the idea of using an antenna away from the head in a case that was meant to contain the speaker for direct listening against the ear. This could be the first time that the modern form used in cell phones was first protected by a patent.

The second important patent US2799775 covers the most innovative part of the circuit, with the introduction of a point-contact germanium diode 1N54A. The body of the patent can be retrieved from Google-patents and contains a description of values used in the patented circuit. 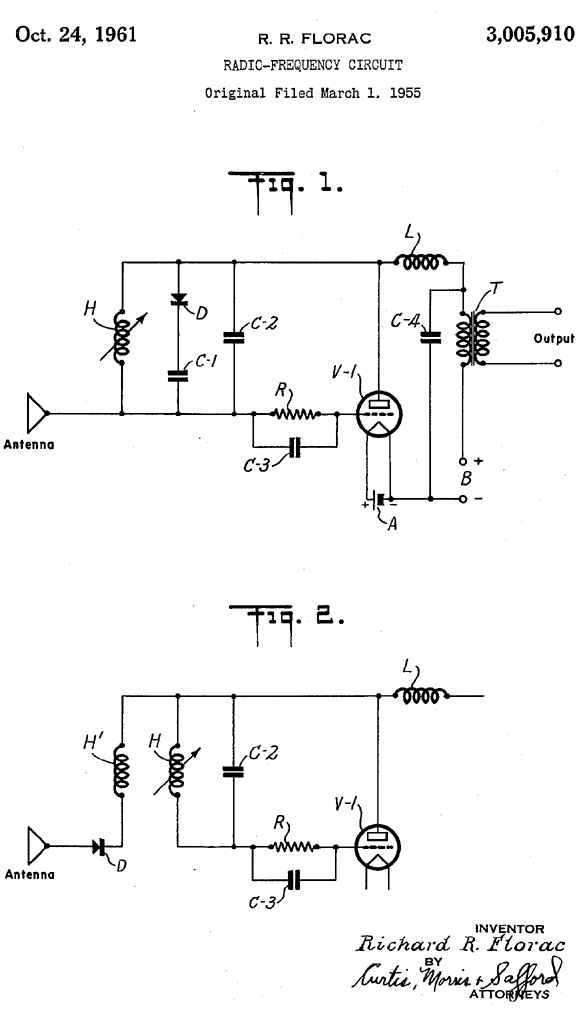 This patent claims two functions for the 1N54A diode. The first function is implemented in the first schematic, and the purpose is to increase detection gain. The patent claims an improvement of 10dB.

The amplification in a Super regenerative detector occurs when the RF burst is in exponential growth as shown in the the first scope photo of  Kosmos X3000, UKW-Pendler mit FET This section of the curve is labelled "Aufschaukelung".

These variations in the time that it takes for the exponential growth vary the average current drawn by the stage at audio rates. The input FM signal does not vary in amplitude until it is tuned by the oscillating circuit, as is the case with slope or flank detection. So the local oscillator should be tuned way from carrier frequency by the maximum FM deviation (+/-75kHz).

But Florac found a second use for his 1N54A diode. He realized that if the diode were placed in series with the antenna, he could still get a slow down in the exponential growth, while isolating the antenna from the burst itself. The antenna sees the envelope detected version of the burst, with much less RF engergy.

Sampled exponential or regenerative growth circuits have been with us since Armstrong first used them for radio detection with super-regeneration. Regeneration is also fundamental to all digital flip-flop circuits. The clock input of a filip-flop is analogous to the quenching action in super regeneration. In most realizations, regeneration is the fastest form of gain that can be achieved. Simply stated, the initial signal of a regenerative cycle grows in amplitude by 2.73x for every time constant that the circuit regenerates. In the example scope photo shown at the thread above, Looking at that scope photo, the regeneration time constant appears to be around 200ns. This means that if the exponential growth portion of the cycle lasts for 10us, the gain would be 2.73^(10u/200n)=5*10^21. This is an astronomic figure, and is conditioned by when the actual start of regeneration occurs. A good part of the cycle after the burst is not regenerative. The gain of 100 that Wolfgang puts on his photo suggest that regeneration occurs for approximatelly 5 time constants of 200ns, or 1us.

There is an apparent discrepancy between this last paragraph and the slowing effect on the exponential growth that the diode causes. Most of the gain from very small antenna signals,could be, perhaps, only 10uV occurs during the faster part of the regeneration cycle that occurs before the diode starts conducting. The later part of the regeneration cycle is slowed by the diode so that this portion has a stronger effect on the duty cycle.

Further comments and understanding of this circuit are invited.

External links about the Hastings FM-Jr.: