This is one of the "transition" post war 1940s models like a 1939 model but with Octal tubes, often US types or Mullard Equivalents. The next year sees the 483 is almost identical chassis in a similar case but with B7G miniature valves. The 1939 All World 399 is possibly the previous battery model, though a table model rather than "portable", unless McMichael made some of the Civilian Battery Radios. Prior to 1939 most McMichael "portables" are of the large 2V suitcase type.

The metal bezel of wave change switch needed to be removed. Both knob grub screws are siezed but I manage to lever / twist / wiggle them off. Two brass hex around the shafts are not nuts, but partially rotate two metal arms supposed to lock the bezel in place. The entire chassis, loop aerial frame and speaker on baffle board lifts out.

Blow torch parts of inside away from cloth and soaking all woodwork with killer/preservative. Later inject all old flight holes with Rentokill. Later still soak again with the Ronseal fluid.

I Wired a B7G on an Octal plug to suit DK92 (or DK96). All the pins except g4 for Top Cap, g3 and g2 (cross over) solder direct to the Octal plug which is handy. I made a little "coffee tin" top cap with spreading base to sit on top of B7G valve.

Only two wires had to "swap", one direct under socket and one at outside. The other four B7G pins and centre earth pin solder to the Octal plug pins directly.

I tested the 1N5GT and DF33 and they are both very good. Mysterious. So put the 1N5GT in for IF.

I checked 10nF waxy from DAC32/1H5GT anode to DL35/1C5GT grid and massive leakage. Replaced with 10nF poly foil. This is the most critical part in terms of damage on any radio as output valve, audio transformer and on a mains set even main rectifier and Mains transformer can all be damaged.

I suspected the main electrolytic (April 1946) screwed to case, so removed + and connected PSU direct. I set to 32V then adjusted current limit under 50mA (under 10mA is probably better). I'll leave it an hour and see has it gone down. Several hours later it's still at current limit and a slight bubbling at negative terminal. I replace it with a modern part glued into metal tube the same size made of coffee tin so it fits on baffle. The clamp is on one of the speaker mounts.

It doesn't actually tune though. Proves to be a loose grub screw on the tuning drum. Now getting R4 (from UK) (weak) and RTE 1 very loud. So valves are good and DK92 works.

The alignment was not far out on LW, but MW almost dead and way out.

Actually neither the MW or LW LO coil could be tuned.

So I undid the clip and found both cores (MW LO and LW LO) had broken off the brass screws.The IF alignment seemed poor too.

Of course the cores had cracked of the adjusters on these too.

I glued them on with superglue. I used the super shiny non-stick plastic peel off layer on double sided foam tape as a spacer to align in coil hole and pressed sticks from rear. 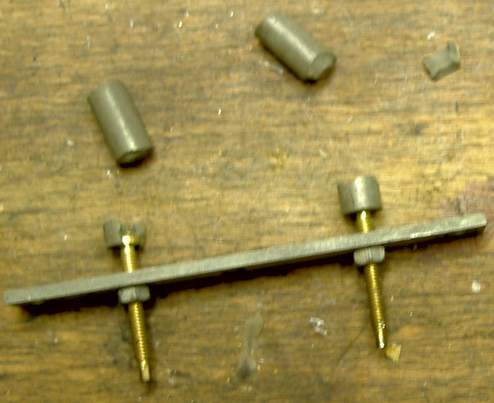 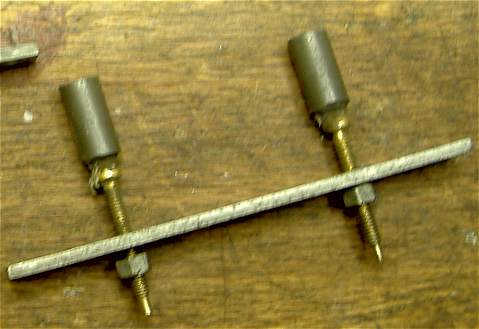 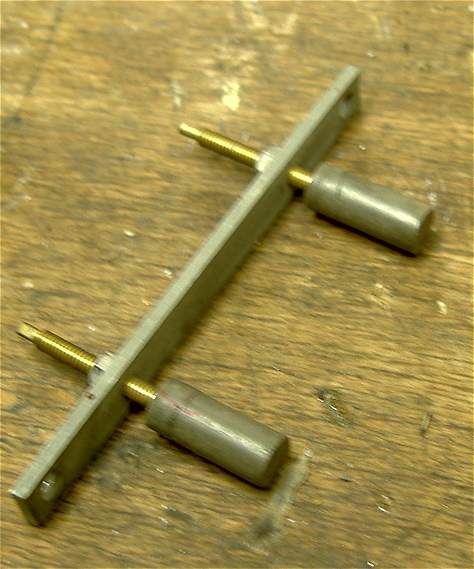 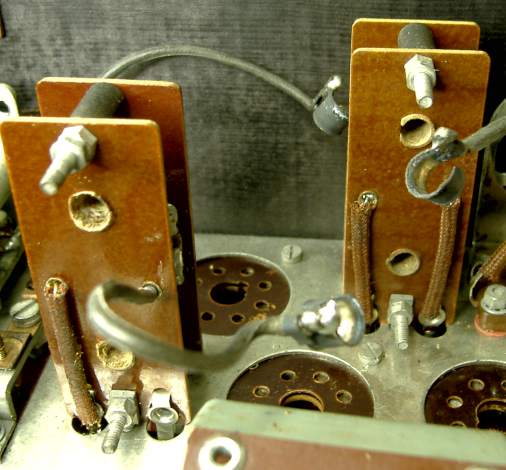 The set is now aligned.

So I found a tested "NOS" 1A7G cheap with cheap postage in USA. Cheaper than 1A7G or DK32 in Europe even accounting for cheaper UK or Spanish or German Postage. 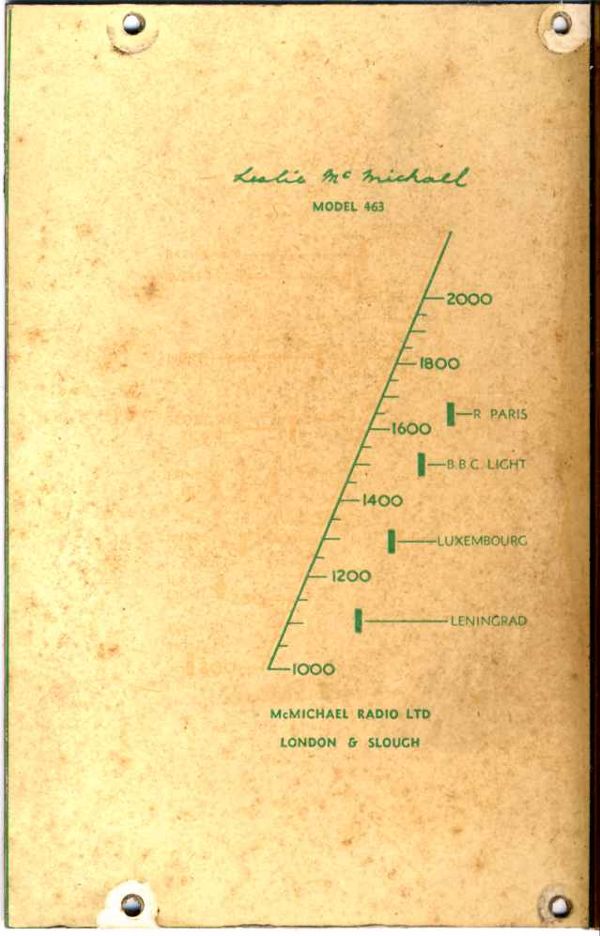 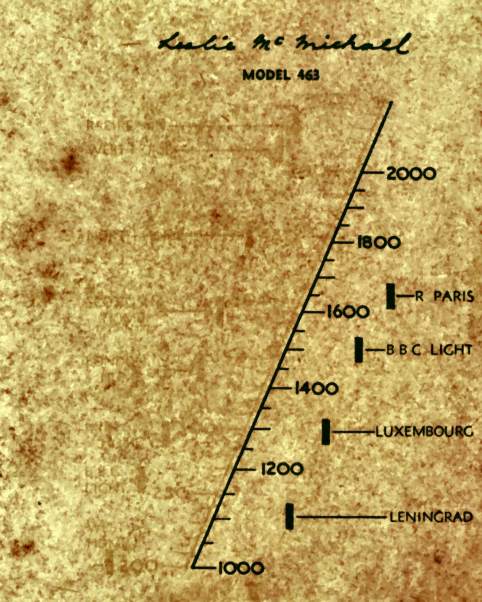 Approximate appearance and attempt at enhancement

However based on what logically the wavelengths should be and stations of the late 1940s I drew this one: 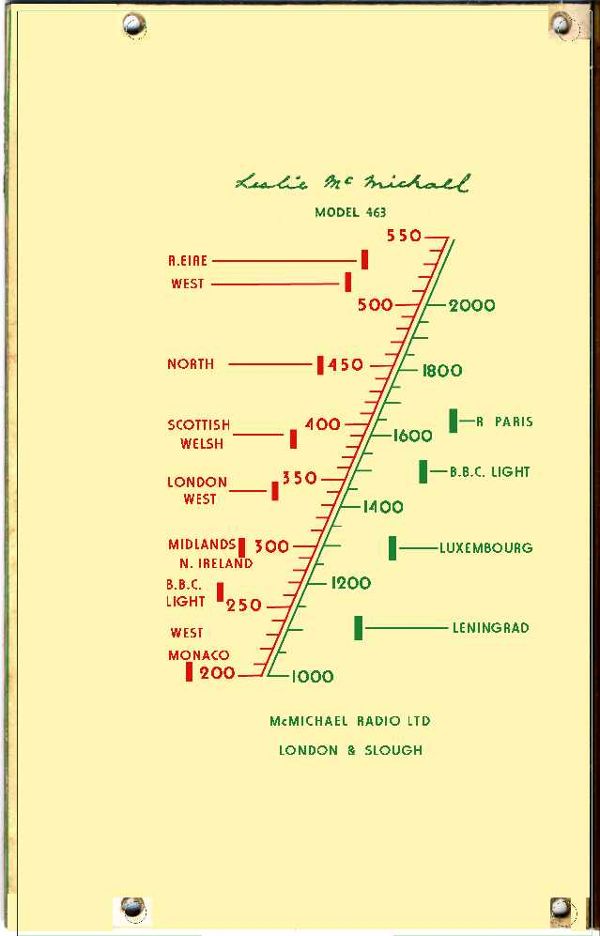 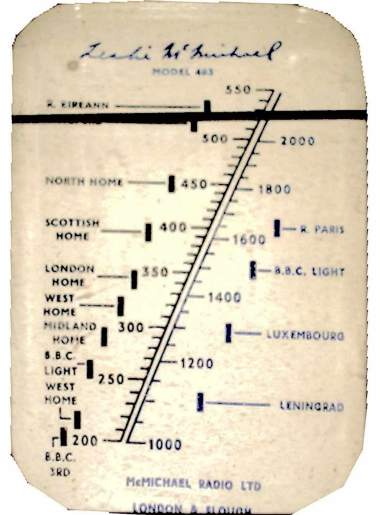 Scale on the 483 in the Museum 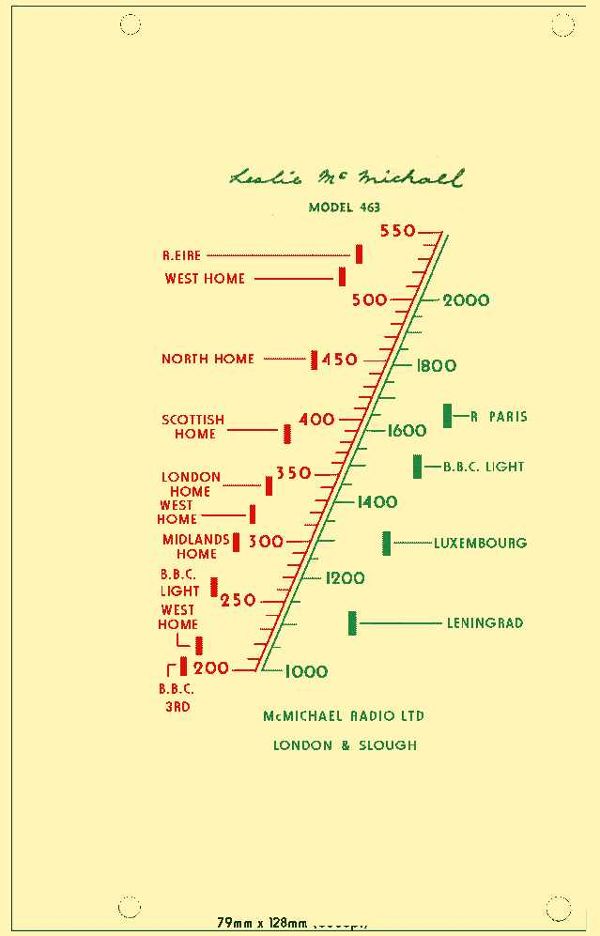 I also reprinted on cream card the "flag" as MW was nearly gone and LW completely gone. It was not far enough on the shaft so rubbing against the front panel. 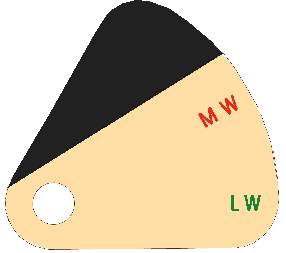 1/4 resolution. Full size can be uploaded.

All printouts had clear background and printed on cream stock.

I made replacement LT plugs from cut up coffee tin. I had already made replica 90V and 1.5V packs (L5155 using 60 x Alkaline AA cells in holders and 4 x "F cells" from a 996 soldered in parallel in an AD4) for my Vidor Vanguard. I'll probably make a B117 livery pack.

After 10 days the 1A7G came and the performance was no different. I will use PVA to glue cut cocktail sticks into the wormholes, cut flush when dry and get my daughter to "touch up" the spots with acrylic paint.

The set performs and operates really well on LW & MW.

Instead of DL35 a 1C5GT  Should these be listed equivalent?

Instead of DAC32 a 1H5GT Should these be listed equivalent?

At least one capacitor in the radio is April 1946.