Original Chassis to be Continued in a Redesigned Cabinet

When first introduced nearly two years ago the Murphy type B4 receiver at once established for itself a position in the front rank of portable sets of the better class. The performance in the matter of range and selectivity was exceptionally good, and the arrangement of the controls on the top of the cabinet with a ledge upon which to rest the hands when tuning was an idea that earned universal approval. 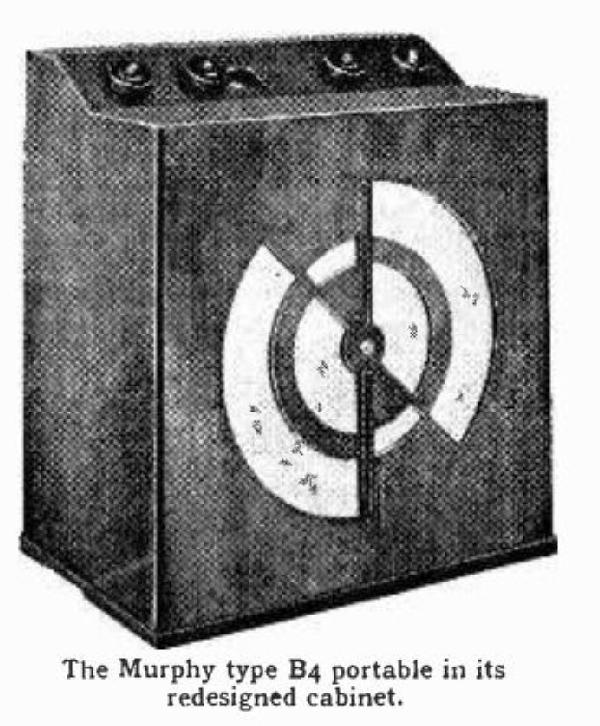 We are glad to note that this feature is retained in the 1932 edition of the B4 portable.
The only alteration to the cabinet takes the form of a new loudspeaker grille of bold and original design. No alterations have been made to the chassis, as the original screen grid H.F. - detector - 2 L.F. circuit gives a performance that is still more than adequate for present-day reception conditions. It is a tribute to the intrinsic soundness of the design that this performance is being repeated consistently in current sets. This was proved by a recent test on a receiver drawn from stock. Upwards of twenty-five reliable programs were available on the lower waveband after dark, while four or five mediumwave stations, including Brussels, Hilversum, and Langenburg, came through well in daylight. The efficiency on long waves is equally good, and the selectivity on both wave- ranges is exceptionally good, even for a set employing a frame aerial. The price of the Murphy portable in its latest form is fifteen guineas