The Philco Mystery Control (MC) is of interest because it was the world's first wireless remote control for consumer electronics.  While there is some information available today about the electrical operation of the MC, the precise details of its mechanical operation appear to be lost.  Philco considered this device to be a "no user serviceable parts" type of unit and any problems were referred back to the factory.  As far as I know, there is no documentation on precisely how the MC operates.  This is important, because it is difficult to tell if operating problems one may encounter with one of the Philco MC models are due to the MC transmitter or the receiver in the radio.

To help resolve this, I devised the following experiment.  Using a Basic Stamp microprocessor, I connected a relay to the MC transmitter to act as an emulator for the MC's mechanical pulsing unit (fig. 1). 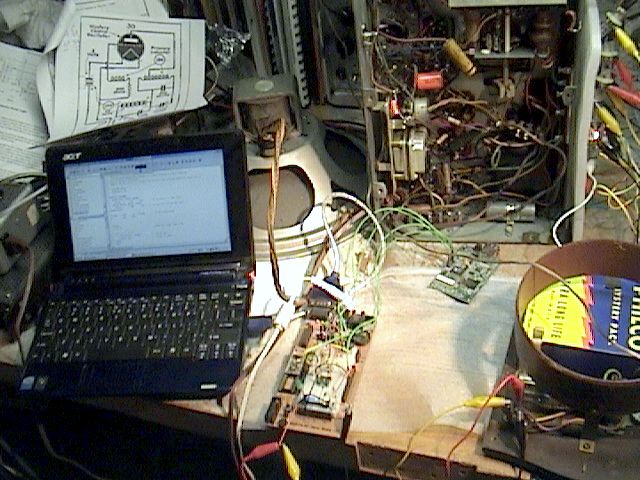 The relay used is a Radio Shack 272-232 SPST relay with a 20 ma. 5 V. coil that can be driven directly from an output pin on the Basic Stamp.  The relay is visible at the bottom of the board in figure 2.  (The other devices on the board are unrelated to this experiment).  One relay terminal is connected to the black wire of the MC plug, and when the experiment begins the other relay terminal is connected to both the red and MC yellow wires.  Connecting red and yellow together normally happens when the MC dial is "wound up" (rotated CCW) during operation.  This activates the no. 30 tube heater in the transmitter but does not send any pulses yet.  (Red and yellow remain connected as long as the dial is in motion.  Pulses are sent during the dial's return rotation).  A complete emulation would require a second relay to perform this, but for our purposes a simple clip lead is sufficient.  (Just remember to unclip red from yellow when done). 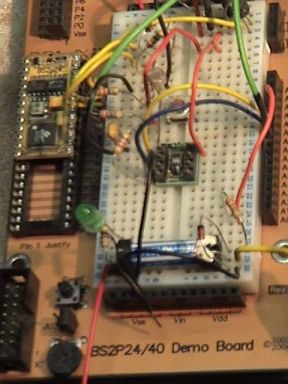 Next, I wrote a small program that emulates the pulses that should be generated by the mechanical dial to control the receiver.  This program is given in listing 1 at the end.   The MC transmitter is now entirely under microprocessor control.  The mechnical pulser is out of the loop.

How this is done is covered in my RM article under the Philco 39-116 model.  Here I wanted to determine the optimal pulse length and pulse width to reliably activate the relays in the receiver and assure accurate station selection without skipping or hanging.  The program contains a variable, Flash, which controls the pulse width.  The pulse gap is simply set as a constant in the main loop.  All values are in milliseconds.  By varying both the pulse width and pulse gap, I was able to determine the optimum values for controlling the receiver.  For each value of each variable tested, I activated the receiver three times on stations 1, 4, and 8.  If the receiver did not respond correctly (switching to the desired station) all three times, then that marked the limit of that variable.

The program also emulates the MC's volume control pulses.  Holding down the fingerstop is emulated by the PAUSE 2000 statement.  This equates to a 2 second volume change.  When running the volume down, one must be careful not to go too long or the radio will shut off when the volume control reaches the end of its travel.   (That's a feature not a bug).

Using the Basic Stamp, I was able to empirically determine that the MC receiver will respond to pulses of length between 30 and 50 msec., with the optimal pulse width in the center of the range, or 40 msec.

The interpulse gap has more leeway.  The receiver will work with a gap between pulses of 40 to 100 msec., with 70 msec. being optimal.

If either of these values is outside the above ranges, the receiver operation will be erratic.  It may select the wrong station, activate the wrong volume function, or fail to respond at all.  There is a 5-10 msec. "gray zone" at each end, where the receiver responds, but incorrectly.  Beyond that, the receiver will not activate at all.  One can imagine that the Philco engineers designed in some fairly strict limits as a means to avoid interference from stray RF pulses.

These results were encouraging, as they confirmed to me that my receiver was operating correctly.  This meant that my problems were due to the operation of my MC.  To test this, I wrote a second program (see Listing 2 below) that captures the pulses generated by the MC pulser unit.  The Basic Stamp setup is very simple: Vdd from the board is connected to the black wire of the MC pulser.  The red (or yellow, it doesn't matter) is connected to any Stamp I/O pin via a 220 ohm current limiting resistor and a 10K pulldown resistor.  When the MC generates pulses, the switching action causes the Stamp pin to change its logic state.  The program reads and outputs this.

This program returns a string of 1's and 0's that I simply copied into Matlab to produce the graph in figure 3 (see Listing 3).  With this I was able to test the operation of the pulser and graphically see what it was doing.  For example, this is what my MC does when selecting station 8: 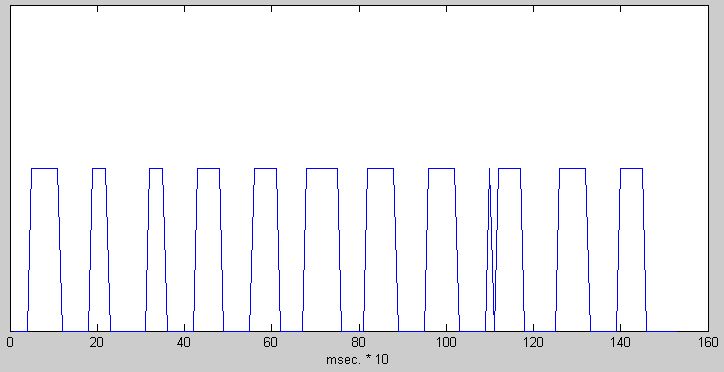 From this it is clear that my MC is running too slowly and had one bounced pulse (no.9).  In addition, the pulses are not of consistent length, which is also a problem.  However, using this diagnostic tool helps me accurately see the effects of various repairs such as oiling or mechanical adjustments to the mechanism to bring the unit back into spec.

The use of microprocessors and computers provides a simple and effective means of troubleshooting problems that would otherwise be difficult to solve.  This demonstration also provides the basis for a full MC emulator.  By connecting the relay to a small modern low-power UHF AM transmitter, one could replace the entire Mystery Control box.  This could be useful to people who own an MC-enabled receiver but do not have the MC unit itself.  Since the Basic Stamp is easily networked, if could also be remotely controlled from a PC or PDA.

That is a very interesting modern approach to looking at older technology!   It could be used in any situation where such equipment is used - Strowger gear for example.

Many thanks and best regards,

Thanks very much for posting that article, Roy, and thanks for the compliments too.  I found some things in there that I hadn't seen elsewhere.  Do you happen to have the rest of it?  It seems to end in mid-sentence on page 8.

Anyway, I have now completely disassembled the Mystery Control mechanism and will report on my findings shortly.

As per my pm, Michele, herewith the complete article just within the file size limits.

Look forward to your results.

This thread was moved automatically.

This question was moved automatically to the board "Talk" to get more possibilities for answers.
Moved from board »RADIO MODELS DISPLAYED« on 01.Aug.09 11:24 from automatically
6

Please use the questionmark only if an answer is needed

The last post here caused this nice thread to go into the internal talk.
We have an automatic process which enables the repetition of unanswered questions in the internal board "Talk" to get more members involved for answering.

But at the same time such a nice thread will then be taken away from the public.
This should be avoided by not selecting "A question - awaiting an answer" instead of "Information".
Questions in such articles are sometimes all right - but then should still be selected as "Information".

With this information post after the "question", the problem should be automatically solved.

This thread was moved back manually because it received a valid answer.