The Trioderizer - a solid state triode

The Trioderizer - a solid state triode

I have followed the German language thread about solid state tubes that was mistakenly posted to the "TALK" section that is not visible to non-members. This also makes it non-translatable by Google-Translate because Google looks like a non-member. This thread covered the use of solid state devices to emulate tubes. Philbrick-nexus had a line of solid state tubes name Fetrons.

I have devised a simple way to make a MOSFET or a JFET behave like a Triode. I call the circuit the "Trioderizer".

As the original post shows, all solid state tubes have a pentode type of characteristic. The purpose of the Trioderizer is to emulate with an external resistor divider, the effect that the plate voltage has on plate current. The plate and grid of a triode both have the same type of effect on plate current, but the grid has mu-times more effect than the plate (mu is the voltage gain of the triode with an infinite plate load impedance). Another way to put it is that the effect of plate vs grid on plate current differs by the voltage gain of the tube mu.

The following circuit shows a N-Channel JFET with resistor values that simulate a triode with a mu of 10. The desired mu is simply obtained by setting the ratio of the feedback and input resistors to 10. In this case, the feedback resistor from drain to gate is 10Meg, and the input resistor to the gate is 1Meg. 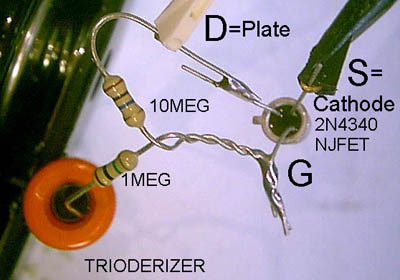 Usualy, a source of DC bias, is needed to set the operating point of the trioderizer to match triode behavior. The goal is to cancel the Pinch-off voltage of the J-FET, or in the case of a MOSFET, to cancel the threshold voltage Vt. This particular 2N4340 has a pinch-off voltage around -1.5V, so I added one 1.5 cell in series with the input 1Meg resistor. The second cell in the picture is unused with this JFET, but it could be added to the first cell for a JFET with a higher pinch-off, around -3V. 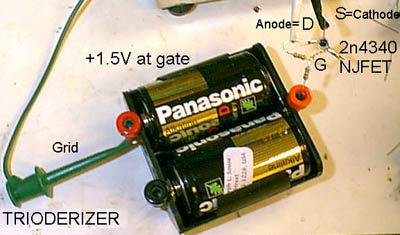 The goal of the DC bias is to have the pinch-off or Threshold voltage present at the gate when the external plate and grid voltages are zero. Other methods of DC bias are certainly possible. 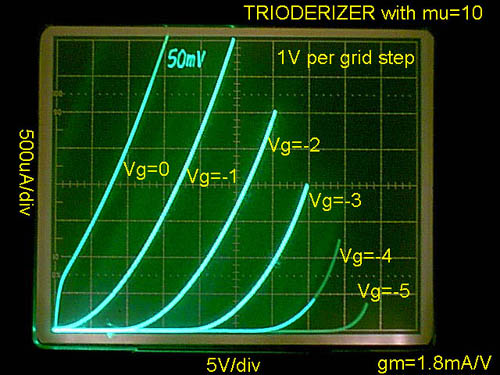 Note that the very same 2N4340 N-JFET without the feedback resistors has the usual pentode-like curve family as seen here: 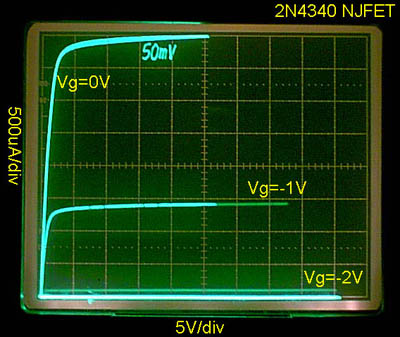 In this set of curves it is quite apparent how little effect the plate/drain has on drain current, once the drain/plate voltage is above the knee.

The Trioderizer circuit also serves to illustrate how similar grid and plate action is on the plate current.

Once the input capacitor is added, the trioderizer behaves very much like a triode at High Frequencies, and even has the same instability problems that un-neutralized triode circuits have with inductive or LC-resonant plate loads.

If you are building a Trioderizer, you could use an adjustable compensation cap at the input, and adjusted it so that the trioderizer has a flat output step response, in the same way that a 10X scope probe is adjusted for a flat top step response. When the step response of the trioderizer is flat, the cap ratio is matched to the resistor ratio. The input cap can be a combination of variable and fixed caps.

Originally, I designed the Trioderizer circuit for my friend Prof Ron Roscoe of MIT to use in his Laboratory course 6.102, which is dedicated to the restoration of Tube radios. Ron wanted to use low voltage circuits for the young students to learn about tube operation at a safe voltage level. A FET is very similar in operation to a pentode, but quite different from a triode, hence the Trioderizer.

See a description of Ron's lab course at page 18 of the MIT student newspaper "The Tech" Volume 127 number 65.

Ron applied the Trioderizer in the following circuit and chose to use a cathode/source bias resistor, which is more convenient than the simple battery I showed above. Eventually, in a different trioderizer assignement, the students had to neutralize the trioderizer with a resonant LC plate load, just as they would have with a real triode.

Input resistance of the Trioderizer:

I chose to start with a Trioderizer that had a mu of 10 and a gm of 1.8mS. If other values of mu are desired, simply change the attenuation network. For example, a mu of 100 could be implemented with with a 100Meg feedback resistor, or a slightly more complex T- attenuator network could be used in the feedback that uses more common common resistor values. A T attenuator network with two 10 Meg resistors in series from Drain to Gate, and a 1Meg resistor to the source would give a net mu slghtly more than 100. The input compensation capacitor is still needed, but now it is 100 times larger than Cgd.

Finaly, you can emulate the Triode that never existed: the P triode, that conducts with Positive electrons and negative plate voltage. Just use a P-channel type of Fet.