The model 39-116RX is part of the collections of the following members.

Old radios often require an inconvenient long wire antenna for operation in the AM band. The Philco 39-116 is one such radio.

This top-of-the-line 1939 set can be tuned on the AM band plus 2 short wave bands with the slide-rule dial, or by a number of AM-band-only presets, that are selected remotely by the Mystery Dial remote control.

My friend Ron Roscoe owns one of these sets. The "WRON" preset you see lit up is for his Ramsey Kit solid state home transmitter. The other presets should be recognizable by Boston, Massachusetts  USA residents.

Ron also has a problem with a lot of light dimmer noise in his house. Long wire antennas are particularly susceptible to this kind of electric field interference. 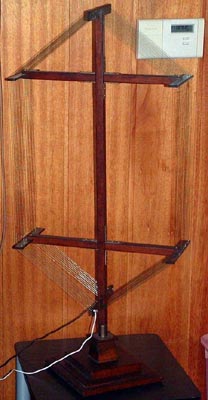 Loop antennas reject the electric field pretty well, while deriving the signal from the magnetic field. So Ron and I set about adapting his set for reception with an external 1920's loop antenna which he already owned.

Alternatively, a new loop could have been hidden inside the spacious console.

The problem with using loop antennas is that they must be tuned with a capacitor to realize the full sensitivity of the antenna. Conneting the loop directly to the untunned primary of the loosely coupled antenna coil produced poor sensitivity.

The input RF coil is meant to be very loosely coupled to the tuned RF secondary to avoid detuning the secondary. Usually, the primary has a large number of turns that is placed a fair distance from the secondary. In this case the distance is nearly 2 inches (5cm).

The problem remains that the loop is not tuned with a capacitor, therefor it can't capture much magnetic field signal.

We measured the secondary of the RF transformer (1) that we disconnected at terminal 3, and found 240uH of inductance.

In an extraordinary case of good luck, Ron's loop antenna also had 240uH of inductance, so it needed no additional turns of wire to increase the inductance, or to have turns removed or moved appart to reduce inductance for a good RF alignment.

If the inductance of the loop were too small, an external series inductor could have been used to add to 240uH. This additional inductor should have been an adustable one for ease of RF alignment.

Adapting the existing circuit to the external loop

The switching scheme between slide-rule tuning and preset tuning uses the RF preamp stage only for slide rule tuning. But this did not pose a problem because the original AM band antenna coil (1) that the loop replaces, was used in both modes.

The colored lines mark the connectivity of the antenna coil secondary and for the new external loop in slide rule and preset tuning.

We added a short 4 terminal strip to anchor the loop connections and to secure the disconnected terminal 3 of the disabled AM band RF antenna coil. 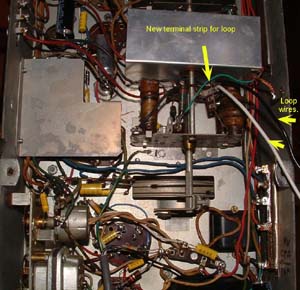 The two black and white wires lead to the loop antenna.

The anchoring tab of the strip was soldered directly to the terminal on the band switch wafer where terminal 3 of coil 1 was originally soldered. The white wire is on this tab.

Now terminal 3 of coil 1 is soldered to a spare lug on the strip.

The black wire was soldered to another lug an the tab and jumpered to where terminal 4 of coil (1) remained connected.

After the loop was connected, Ron added some wooden spacers between the black and white loop antenna wires to keep a stable separation between the two wires. Variation of this separation would affect alignemt at the top  of the AM band, where the tuning capacitance is smallest.

The alignment is easiest for the presets because there is no compromise of maintaining good alignment over the entire AM band.

We tried 300 Ohm TV/FM twin lead to connect the loop, instead of the black and white wires, but the the capacitance of the twin lead was a few tens of pF and made it impossible to align the High end of the AM band.

Using thick wires (AWG<20) that are no more than 4 feet (1.3m) long helps preserve the Q, or sensitivity and selectivity, of the loop.

If you are a loop expert and can make a loop with a Q of 500 or more, it will be difficult to keep the loop in good alignment with the relatively loose tracking of the padder capacitor arrangement of the local oscillator. A Q up to 100 should be very sensitive and give good alignment performance.

Besides loop sensitivity, Q establishes the reception bandwidth. A Q of 100 at 1MHz means an RF bandwidth of 10kHz, or an audio bandwidth of 5kHz.

The high impedance/inductance of the original RF antenna coil (1) makes it suitable to connect directly to an externnally tuned loop, even up to the 240uH of Ron's loop. But Ron was not about to sacrifice the wonder of automatic control from 1939 with a manually tuned loop with an external tuning capacitor!

Note that the loop only works for the AM band. The two SW bands still take their signal from the original antenna terminals.

(This was posted here several months ago but it seems to have vanished, so this is a repost - too bad too, because I had pictures and everything).

Here is my definitive version of how the remote receiver works:

1. In the beginning, the station selecting switch (SSS) can be in any one of 8 different positions corresponding to the last station tuned - it doesn't matter which one.

2. Receiving the first pulse from the Mystery Control (MC) causes the holding relay to engage (and it must remain engaged during steps 3-5 below). The first pulse also causes the stepping relay to advance its ratchet one position. However at this point it does not yet cause the SSS to move. (You are still tuned to the last station you were listening to).

If pulse 2 is extended (by way of pressing down on the fingerstop on the MC), then the volume control motor is activated in the "down" direction for as long as the fingerstop is depressed.  If there are three pulses and the third is extended, then the volume is raised.  If there are two or three pulses but they are not extended, then nothing happens.

4. When the fourth pulse (if any) is received, the pawl on the SSS (secondary) ratchet is released, causing the spring on the secondary ratchet to quickly rotate the SSS back to station 1. This happens very fast - it literally snaps back, in less time than the inter-pulse gap. (In my radio, I had to clean and lube the SSS and exercise it a few times before this would happen. The spring is strong enough, but not that strong).

6. When no more pulses are received, the holding relay drops out and the SSS stays where ever it was when it got the last pulse. The cycle is complete.

7. The next time you twist the dial on the Mystery Control, the entire process starts over again with step 1.

Hello dear Radio Collectors.  I am looking for a copy of the Rider's information for this radio.  In particular I need the parts list and the chassis parts view.  The copy I have is of poor quality and the small numbers blur together.  I'd be happy to do the scanning and add it to the model if someone has a hardcopy they could send me.  Thanks!