The model Radiola is part of the collections of the following members.

Thanks to Ramon Gancedo, Madrid, Spain who decided to scan some pages of the RCA-Manual for www.radiomuseum.org and Thomas Günzel, Ulm, Germany who did the OCR-Recognition I am able to present you an article which shows the function, the build up and the operation of a Regenerative Receiver and Amplifier. We now worked the same way for model Radiola VI (six) Model AR895.

Radiola VI, model AR-895 is designed for use on a loop antenna with a parallel variable air condenser for tuning purposes. This method of radio receiving combines the advantages of directivity with a minimum of interference from static, and local electrical disturbances. The use of a loop eliminates the necessity of erecting an outdoor antenna. Either a loud speaker or head telephones can be used, depending on the distance from the broadcasting station.

One Pair of Head Telephones with Plug (Model UD-824)
A loud speaker may be added if desired.
INSTALLATION
A loop for receiving broadcast wavelengths should consist of ten turns of wire such as single lamp cord or bare or stranded copper at least No. 18 B. & S. gauge spaced about half inch apart and wound upon a wooden frame three feet square. Provision should be made so that the number of turns in use may be varied from five to ten. Mount the loop so that it can be rotated about a vertical axis. With this loop use a small variable air condenser, about 0.0007 to 0.001 microfarad maximum capacity, to constitute the tuning system.

Set RADIOLA VI upon a table in a desirable place and put the loop and condenser immediately at the left. Lift off the mahogany top and remove the covers of the units by pushing upward on the catch and lifting the covers backward and up. Locate the storage battery in any convenient place. If this is at any considerable distance from the set, use heavy leads. Place the "B" batteries as near the receiver as possible.


When making connections to the receiver, use a long screwdriver. Insert the wire in the hole in the terminal before loosening the screw inside the case. Then loosen the screw until the wire can be pushed all the way in, after which tighten the screw. Connect the tuning condenser and loop in parallel and extend the connections to the two "INPUT" terminals on the left end of the unit.

When using Radiotron UV-200 as the detector, connect the batteries as shown in the diagram. When Radiotron UV-201-A is used as the detector (which will give less critical but not quite so good results as the UV-200), omit the lead from the 18-volt tap of the battery to the terminal marked "+18 V." and connect the two terminals "+18 V." and "+40 V." on the rear of the set by a short wire.


When using Radiotron UV-200 as a detector, better results are sometimes obtained by very accurate adjustment of the plate voltage. This can easily be accomplished by connecting the outside terminals of the Model PR-536 Potentiometer (purchased separately) across the 6-volt storage battery and the middle terminalto the negative (—) of the 40-volt plate battery, omitting the connections from the "-40 V." terminal of the receiver to the plate battery. 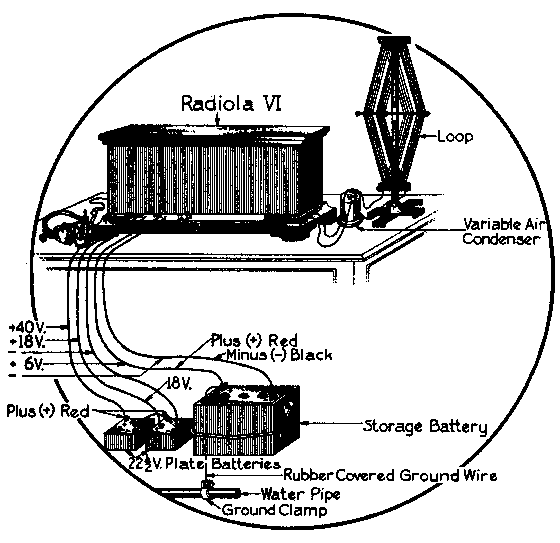 Turn all six "FILAMENT" rheostat knobs clockwise to "OFF"' before putting the tubes in their sockets. Place a UV-200 Radiotron in the left-hand socket of the Detector-Amplifier unit, and UV-201 or UV-201-A Radiotrons in all the other sockets. The tubes are put in place by lining up the pin in the base with the slot in the socket, pressing downward on the tube, and then turning it to the right into position. The grid leaks should be in the clips as shown and need not be disturbed.

After the covers and top have been replaced, the illumination of the tubes can be observed through small holes in the front.

RADIOLA VI is now ready to operate.
OPERATION
Adjust the telephones snugly to the ears and plug into the left telephone jack, marked "DETECTOR."   A click should be heard on inserting or removing the plug.

Turn the "FILAMENT" knobs counter-clockwise to bring the tube filaments to proper brilliancy. This is a little less bright than the ordinary incandescent lamp with UV-200 and UV-201 Radiotrons, and is usually obtained with a setting of from 50 to 100 on the "FILAMENT" knobs.

For proper illumination of the UV-201-A Radiotrons, see the instructions accompanying tubes. The setting of the dial in this case will usually be between 10 and 50. Whenever one or both of the audio frequency amplifier stages are not in use, turn the respective knobs to "OFF." This does not apply to the radio frequency amplifier, as all three of its tubes must be lighted when the set is in operation.

Tune to the desired signal by turning the variable condenser knob over the scale until a signal is heard. Set the knob at the point where the signal is loudest. Rotate the loop about a vertical axis, setting it also in the position of the loudest signal. Experience in operation will indicate the correct number of turns of the loop which will give the most satisfactory results.

Adjust the "STABILIZER" knob to the position of best signal strength. The intensity will increase as the knob is turned clockwise, but at some position the signal quality will be destroyed. At this point the receiver becomes a transmitter and seriously interferes with neighboring radio receivers. This condition of oscillation must be avoided, but if it does occur, immediately turn the "STABILIZER" control backward until the signal clears up.

After "tuning in" by the above method, the telephone plug may be inserted in either the first or second amplifier stage with an accompanying increase of signal. Slight and careful readjustments of the rheostats may further improve the signal strength, but extremely fine adjustments will not be needed on the radio amplifier.

Further slight adjustments may be necessary when the telephone plug is removed and the loud speaker is placed in circuit. If the loud speaker signals are not as loud as desired, they can be intensified slightly by removing the PR-516 one-half megohm grid leaks from the clips at the rear of the two audio amplifier tubes. The purpose of these grid leaks is to improve the quality of the signal.

When the receiver is not in use, disconnect the batteries by turning all filament knobs to the "OFF" position. Turning the "FILAMENT" rheostats to "OFF" also cuts off the "STABILIZER" current. 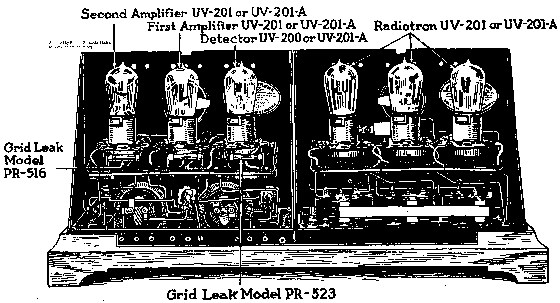 NOTICE
This device is not licensed except for amateur, experimental and entertainment radio use as defined and to the extent indicated in the current issue of the catalogue of the Radio Corporation of America. No express or implied license is granted under any patent owned by the Radio Corporation of America, or under which it is licensed, to use or sell this device as an element or part of any combination on organization except as expressly set forth in said catalogue.