The model Stereo-Decoder (1) is part of the collections of the following members. 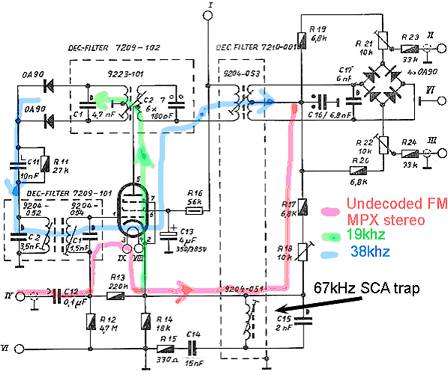 Grundig made several FM stereo Multiplex (MPX) decoders for the USA market. This model makes use of a single Pentode to accomplish full stereo decoding using REFLEX techniques. Reflex techniques were pioneered in the 1920's as  method to use the same tube to amplify RF signals before detection, and AF signals after detection. The motivation in the 1920's was to save cost.

Grundig's motivation to use Reflex circuits in this stereo decoder, and in their line of 3-tube AM-FM table radios from the mid 50's to the mid 60's, was also to save on tube count for the German market, where radios were taxed by the number of tubes. For examples of Reflex FM front end circuits see 3 tube table radio Grundig models 85,87,88,92,101.

In every Reflex circuit the tube amplifies signals in different frequency bands without interference among the signals.

In this circuit, an undecoded FM stereo Multiplex signal up to several volts in amplitude is applied to input IV. This signal comes from a wide band FM detector that can pass the R-L sideband signals ranging from 15kHz below 38kHz, to 15kHz above 38kHz, as well as the 19kHz 10% modulation pilot sinewave. Low frequency signals from 20Hz to 15kHz carry the L+R mono signal that all FM radios reproduce.

The cathode at pin2 of the 6BH6 Pentode simply follows the undecoded signal just described and presents a low impedance to R18-R22,which, in turn, drive the OA90 diode switching/decoding bridge.

C15=2nF and the associated inductor provide a filter to kill the 67kHz signal that may be present for the SCA (Subscription CArrier) music service. This signal has nothing to do with stereo decoding; it provides mono background music by subscription to businesses, restaurants and elevators.

I described the FM stereo Multiplex signal as a series of frequency components. But if you look at this signal on an oscilloscope, you can see that these various frequency components combine to produce a signal envelope that has the Left channel represented in the odd half cycles of 38kHz, while the Right channel is represented on in the even half cycles of 38kHz. This means that one simple method to separate the L and R signals is to connect the undecoded signal to the Left channel when the 38kHz wave is in the odd cycle, and to the Right channel when the modulated 38kHz wave is in the even half cycle.

A mono signal has equal L and R amplitudes, so you see no L-R difference from odd half cycles to even half cycles at a 38kHz rate. This is also true with an FM stereo transmission that is broadcasting an old mono record.

The OA90 diode bridge accomplishes the switching action when it's diodes are turned on and off by the fixed amplitude 38kHz signal coming from 38kHz tuned transformer driving the left and right ends of the OA90 bridge.

The bridge switching action can be done in several ways. In this circuit, a 38kHz transformer driving the diode bridge, adds a high fixed amplitude to the incoming signal from the Cathode follower and makes the odd 38kHz half cycles much more positive than the even negative half half cycles. The net result at C17 is what looks like an AM modulated signal with a 38kHz carrier, having the left channel riding as the positive envelope and the Right channel riding as the negative envelope.

The schematic does not make clear which of these II and III outputs is Left and Right. I may have the left vs right assignment reversed, which is not important for the explanation. With this particular method of positive and negative envelope detection of the two output channels, there will be a positive and negative DC voltages developed at II and III. These DC voltages are blocked by AC coupling caps external to this schematic. The external Stereo amplifier also includes a C-L-C PI filter to filter out frequencies above 15kHz.

So far, circuit operation does not use any Reflex methods. In fact, the necessary fixed amplitude 38kHz wave driving the bridge could have been obtained from the input signal with a series of other tube stages, as is commonly done with less elegant Stereo decoders.

Using REFLEX techniques, the 19kHz pilot sinewave that represents 10% of the total input signal must be isolated with a filter, amplified and doubled in Frequency to create the necessary fixed amplitude 38kHz wave. This fixed amplitude 38kHz wave is synchronous with the input MPX signal and is needed by the 0A90 bridge to separate the L and R signals to their respective outputs, as described above.

R15 with C14 and C15 present a low impedance to the Cathode of the 6BH6 pentode at pin2, so that high gain is obtained at 19kHz from the input grid pin 1 to the plate pin 5, in a classic common cathode configuration for 19kHz signals. The illustration shows the 19kHz path in green.

The plate drives a 19kHz double tuned transformer, with 180pF at the primary and 4.7nf at the secondary. The 19kHz signal is greatly amplified at the output of this transformer to drive a AO90 diode pair.

This diode pair applies full wave rectification to the 19kHz sinewave to produce a doubled frequency at 38kHz,.

A 38kHz double tuned transformer with C2=3.5nF at the primary and C1=1.5nF at the secondary filters the full wave  rectified input 38kHz signal into a clean 38kHz sinewave.

The secondary of this 38kHz is in series with the input driving pin1, the control grid of the Pentode.

Now we see that the grid is driven by the original undecoded signal, and by the newly created 38kHz fixed amplitude wave.

An amplified version of this 38kHz wave is now also present at pin-5, the plate of the pentode, and is extracted from the plate current by the single-tuned 38kHz transformer that drives the output OA90 decoding bridge.

In total, the 6GH6 pentode is performing 3 separate amplification operations: It buffers the input MPX signal to the cathode, it amplifies the low level 19kHz signal for frequency doubling, and amplifies the 38kHz signal to drive the output OA90 diode bridge.

A single tube amplifying 3 different signals independently may be a record number of signals for REFLEX circuits. The usual number of independent signals amplified in a reflex circuit is usually only 2.

The 6BH6 pentode is not the only tube that can make this circuit work. In fact, the 6BH6 can be replaced with a 400 Volt small signal mosfet from Supertex. I tried the LND150 NMOS FET from Supertex and the circuit worked just as well. So this circuit could also be the world's only single transistor FM stereo decoder. Transistor operation also has the advantage that it could work with much lower supply voltage.