The model Romance FM is part of the collections of the following members.

I call this a "repair" rather than restoration as I have no circuit, no back, no speaker, most tubes missing, Model and Tube line up unknown. The case is a little rough. It was part of a Lot I bid on for the Ultra "Twin 50", so in a way it was "free". No extra postage as it was an Auction in Ireland.

Yes, that's what is on the front! The “stages” are roughly different days, some days might have more stages though.


But.. the valve line up is a problem ( ) means missing

Rectifier ( ) (on top of transformer)
Chassis is stamped 1961 below the switch unit at the front. 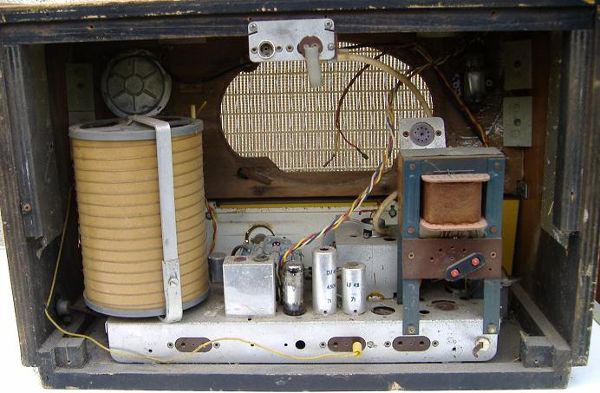 That’s an ECH81 between the two IFT cans. Can’t be right!

The main elliptical speaker is missing.

I thought it was the Schneider Romance FM 1958

The main chassis has only 4 sockets, one is B7G. There are 3 other valves Magic Eye, Rectifier and FM head. Intriguingly there is a punch out for a 5th base, but it definitely never had one.

It's got a pair of OA something maybe for FM discriminator. Maybe the b7G is an EBC91?

Maybe it's the case and chassis of two different sets? The speaker is missing.

Any ideas what schematic and what missing tubes? Underneath looks original

So my best guess
7: (ECC85) ECH81 (EBF89) EM81 6AU6 EL84 EZ80 (maybe EZ81)
The two OA somethings definitely replace EB91.
There is a French thread discussing EL84 vs 6AQ5 (plus de puissance = More Power!) in relation to Schneider Romance but no schematics or other tubes mentioned

I wonder is mine a later Romance FM in the 1958 cabinet?

Anyway what you think of the screened turning Loop Aerial Drum? I never saw that before!

After studying as many Schneider schematics as I could find:
The missing IF is certainly EBF89
Some (many?) Schneider sets did use 6AU6 (EF94) RF Pentode as audio preamp driving an EL84. A 6AU6 does make gram input work.

I decide the line up is either

Eventually after "Raiding" my friend's valve stock and borrowing the VCM162 to test them I get very weak LW from signal generator (Thanks Albert Lahoud).

Three smaller "hunts" style caps cracking up so replaced as is 2nd HT capacitor and EL84 cathode decoupling. RTE1 on LW and hiss on VHF. Swap the ECC85 for ECF82 and Local FM stations... But it fades away.

See the photo at the model of replaced capacitors

The giant funky drum does work on LW as rotatable directional aerial. Presumably MW too (try at night).

I had to redo the AM drive cord which is a pig.

Fortunately it's virtually identical to 1958 Romance FM. (The Chassis has a "1961" stamped on it)

The Radio has separate AM & FM drive knobs and scale pointers.

Amazingly the entire VHF-FM scale is a + & - 50 (KHz?) "band spread" on SW.
The LW & MW both have piano key positions for External Aerial and internal loop (Cadre = lit. framework)

Now to figure out alignment with no service info. Too many coils and the schematics for Schneider sets show simply a dotted box for the switches and coils.

Now I need a new EM81 (not a glimmer) and an Elliptical speaker. The alignment first as it's badly out.

The performance on VHF-FM was strange. A strong station was beautiful. But a weak station would have a fistling and whistling with distortion.

I started with the IFT on the VHF head (carefully) and it suddenly went dead. Swapped ECF82 and just the same. LW/SW/MW ok. I peered at the lurking VHF head and pondered what to do. I could see two of the litz wires on the IFT to tags for o/p coax to main set from "open" side of the unit. They looked OK but I resoldered.

Examination suggested the screws on the valve base/screening can base + three solder joints held cover on. Indeed the screws are on pillars on top of a valve socket under chassis. 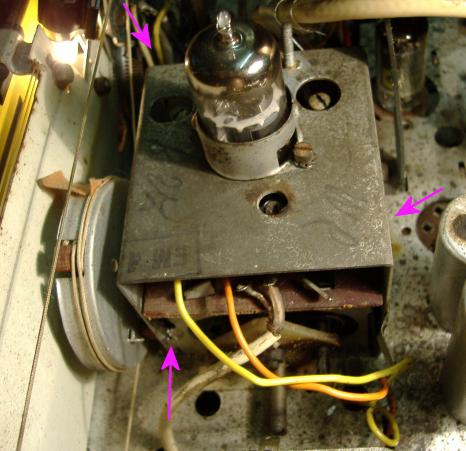 I scored solder joints with knife blade and a slight twist of screwdriver blade in joint and the joints one after another spring free.

The reason for the silence was immediately obvious. The Primary winding between an Anode on the ECF82 (no idea which, but likely the triode is oscillator and Pentode is mexer/IF out) and the HT was missing about 5mm of Litz wire at the HT side. 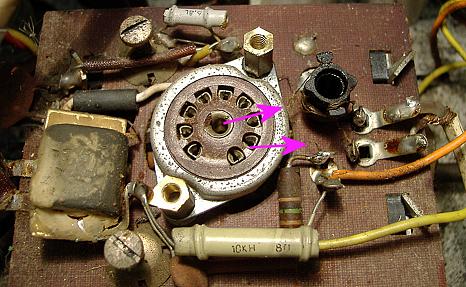 I'd guess it was rubbing against the underside of the cover, or was damaged originally and gradually disintegrated.

I added a fine piece of solid wire putting one turn on the "peg" of the coil former using fine nipper nose pliers. 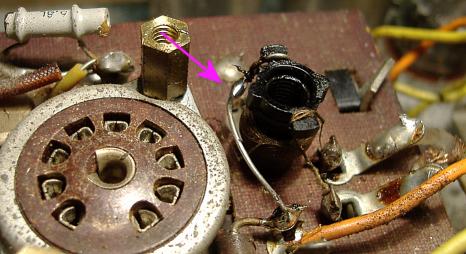 Then with a hook made of the wire and very pointy tweezers I put 3 turns of the end of the Litz wire going to coil around it and "dressed" the remaining Litz wire along the solid wire. I soldered then till I could smell the coil former starting to protest.

The VHF is now nearly perfect (helped by a piece of Lidl coffee tine replacing the missing valve screening can.

I gave the IF chain a quick check by unplugging the ECF82 and connecting the Signal generator to the tags on the VHF Head IF out at 6.75MHz.

The case is missing the elliptical speaker so I cut off two edges on an old 8" Speaker, the remaining one from a pair on an "Amstrad" not-really-HiFi system dumped 30 years ago and someone gave me the remaining speaker about 12 years ago. It fits now in space for the elliptical on the Romance FM. I used the cutting wheel on the Dremel. Minimal dust as it "burns" away the steel. This is just temporary till I pick up a cheap elliptical speaker to fit properly so I slipped heavy corrugated card under the speaker to block the two spaces on either side.

The on/off mechanism is just too poor quality. The pillar with the actuator is loose and thus the the spring pushes the actuator past the stop and the switch opens again.

So since it's a strange dual gang pot with a long shaft I decided to put a microswitch. The NC contacts which open when the lever is depressed is used.

Here is the spindle about to turn off 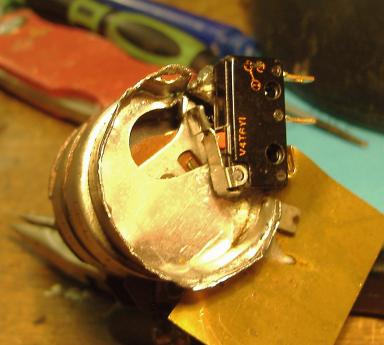 Here the switch is pressed, i.e. off 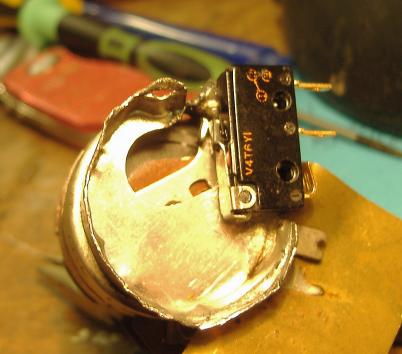 The edge of the case cut open and hole at "pot" enlarged. The microswitch lever was bent to poke thorough the hole and engage with the plate on rear of pot and put in place with rapid epoxy.

My espresso maker failed because the microswitch fell to bits. I'd bought a pack of 10 decent ones not long previous for not much different to one in Maplin and they were same size. The Espresso maker working now 3 years. So likely it will be reliable on the radio. Of course I forgot to refit the insulation ring and end stop

so the back has to come off the pot. Fortunately I think I can do this without disturbing the nicely working microswitch or the wiring. I have a little "dinge" in case for shaft lever to catch on so it stays in off position. 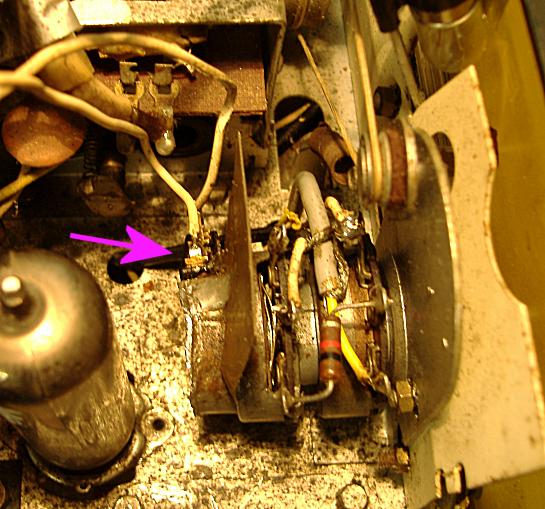 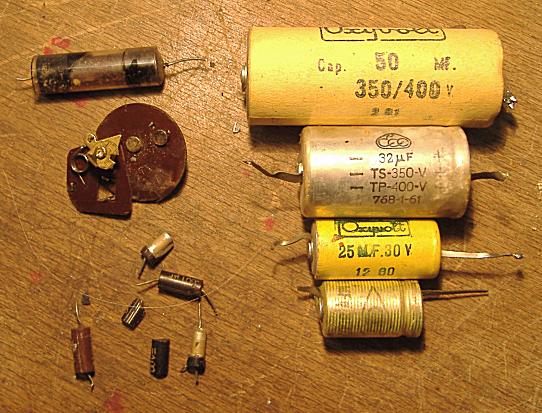 The one in a plastic tube with tar like ends was across the mains.
The 25uF 30V was on EL84 cathode. Replaced with Military grade 22uF 25V Metal can Tantalum. The other three electrolytic were HT decoupling. 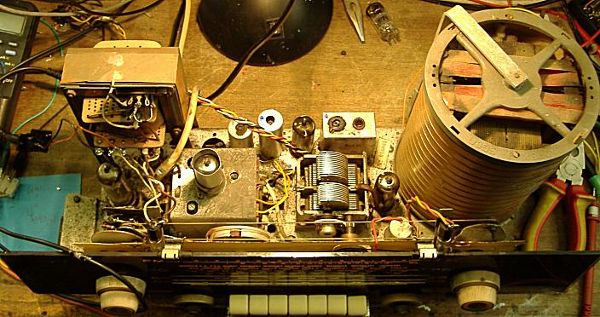 Performance
It sounds fine with my "chopped" 8" speaker (original elliptical missing) and the original electrostatic tweeter. The Bass and Treble controls work well

The VHF is prone to a "whistle" when not tuned to a station and doesn't seem very sensitive. I'll check the ECF82 later. But with medium strength stations seems fine.

The Shortwave is awesome on just 2.5m of wire over curtain rail. The entire VHF dial is about +/- 50KHz bandspread (100KHz) (A Yaesu FT101 does about 500KHz per band), so you have "full" bandspread no matter what part of SW band the main AM dial is set (FM labelled also "OC loupe" = SW magnifier). SW reception seems very good and stable.

Considering this set came with only EM81 (dead), EL84 (tests good) and a faulty ECH81 incorrectly plugged into the IF tube socket, I'm very chuffed to have got this "thrown in" the lot I bid in a local auction to get the "Ultra Twin 50" I'm even more pleased to get it working without any documentation of valve lineup or an accurate schematic. The EBF89, 6AU6, replacement ECH81 and ECF82 (along with ECC85 to try) came from Member Albert Lahoud.

This is different from the 1958 Romance FM, but in the same case and using the same metal chassis including hole for unused EB91. 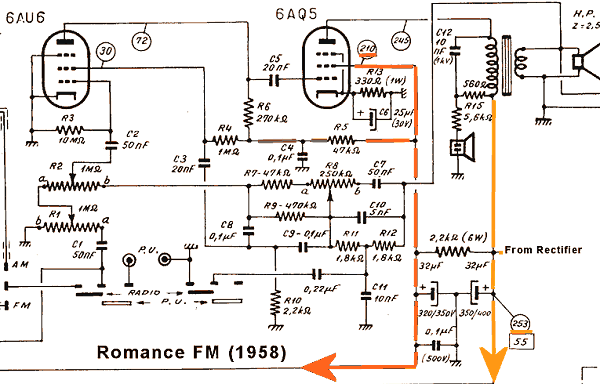 I've never seen NFB to the screen grid before! Also, the 6AU6 appears to be operating without any bias (the cathode is grounded and so, indirectly, is the grid).

This shows that there is
1) Essentially DC feedback from Anode to g2 of 6AU6
2) AC feedback via tone control to g2 AND g1 from output at the speaker. The version I have is EL84, but circuit looks similar. Except it has Treble and Bass. 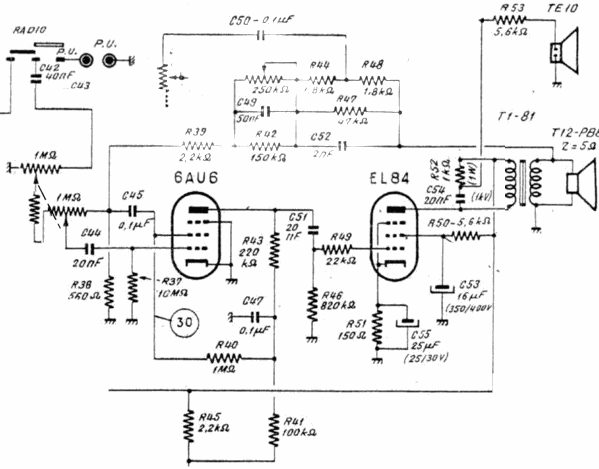 The above schematic is an edited version of a different Schneider that uses dual gang pot for volume and 6AU6 + EL84. But it's not the same, hence I "greyed out" part.

The dual gang pot looks like it has been fitted as an alternative to a tapped loudness control.

It's a feature of almost all the Schneider designs 1956 to 1959 I looked at. It's not used the same way as most tapped pots. The 1st pot near panel is fed with Audio via a screened cable. It's wiper goes to "maximum" end of 2nd pot beside switch (directly on all schematics I have seen, but my set has a 1 K resistor). The minimum end of 2nd pot is fed from tone control network which has a Bass and Treble control and is fed from the EL84. The wiper feed 6AU6 grid via a capacitor on screened cable.

As well as the two screens on the 1st pot "earthy end" there is a wire going to "earthy" part of tone control cable. So the Dual pot has 2 wires (one signal & 1 "earth" from tone feedback) and two screened cables.

it's not an arrangement I've seen. It's obviously a deliberate DESIGN time alternative to a tapped pot. I suppose a single gang 470K pot and the tone feedback and audio in both via 470K resistors to "top" of pot might work...

An apparently puzzling feature is that many Schneider schematics (1956 to 1958) show only one tone control even when a photo appears to show Treble and Bass. (Romance FM 1958)

However close examination reveals that the 2nd knob on the right of piano keys is labelled "Cadre" (= framework , i.e. Frame or loop aerial), a knob to rotate the loop aerial. My model (stamped 1961 on chassis and VHF head) has a slightly larger Schneider badge and the "Cadre" knob is at the side. The front knob to right of piano keys is in fact Treble, like on German sets.

Here is close up of the "drum" 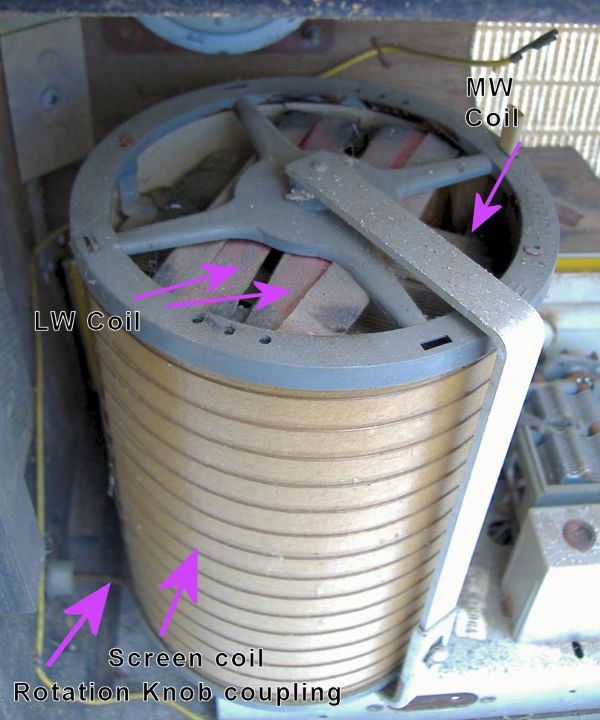 The outer "screen" wire could be used to pickup local interference and "cancel" or as a sky wave aerial on HF, but I think it's just a screen to reduce local E field pickup by MW & LW coils.

Points of Difference with “Romance FM ‘58” 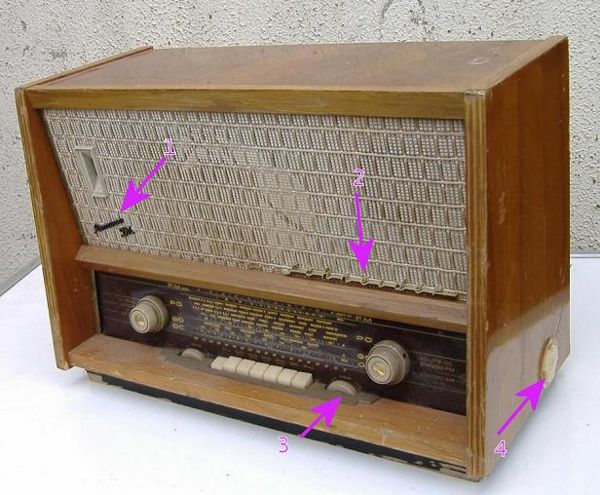 Other Schneider models do use the EL84. (but not any "Romance" variants I've seen)

[Trans: Some time ago, I posted a topic on a Schneider Romance FM 1960 or (61?). It gave me several hours of good reception but support the tube EL90 has the final ageing and poorly produced bad contacts increasingly often.]

Several French forum threads mention  a “Romance FM” 1961 version with EL84 rather than the 6AQ5 on earlier models. Plus Puissance!