The model SG3 kit for LW & MW is part of the collections of the following members.

Probably the design was originally three tubes, the base board hardly fits four and one transformer and socket seems later type.

So wired as a three valve (tube) kit Radio. Osram VS24K as RF "SG" Tetrode, HL210 Triode as Regenerative amp and detector, Mullard PM2 Triode as output. VS24K g2 volts is 60, all other HT is 120V. The PM2 has  -9V grid bias. The "Ever Ready Sky Queen" box behind is a spare (no radio or amp in it!) with a 240V to 6V transformer (as an audio transformer) driving a 1950s 4 Ohm moving coil loudspeaker (2n2F snubber/tone correction on primary). There is no amplification in it. It's instead of 4K headphones,

I have no high impedance phones, so I used a transformer and moving coil speaker for a longer video demo after dark (no daytime MW here in Limerick, Ireland).

The coils wave change switches were seized. As well as fixing the switches I worked out the wiring and measured the inductances in MW & LW mode. This shows the coils and switches are working and the wiring is actually correct.

Information on the coils is below the photos. Heat from gas stove and hammering was needed to free the switch shaft in the "collet" / outer barrel on both.

The first RF stage (V1, the RF SG/Tetrode S210_Tungsram or possibly an SG215) has 8 windings and the second RF stage has an additional pair of windings for "tickler", the coil connected to anode via a capacitor for regenerative feedback on V2, HL210 (triode recommended for Detector or LF preamp).

Three connections are labelled 3, 5 & 6. Functions according to existing wiring:

I have arbitrarily referred to unused connection between 3 & 5 as 2 and beside 6 as 4.

Pulling up the switch is MW and shorts 2 , 4 & 5, pushing down is LW. The unlabelled connections I have called 2 & 4 are obviously for front panel Wavechange switching along with 5 which is aerial input via a capacitor.

The top 6 windings connect a top to 2 and bottom to 4, the centre tap is 5. There is then a gap of two "windings" and the next coil is on 2 and 3. The last coil is 4 & 6. The connections in bold have two winding connections. 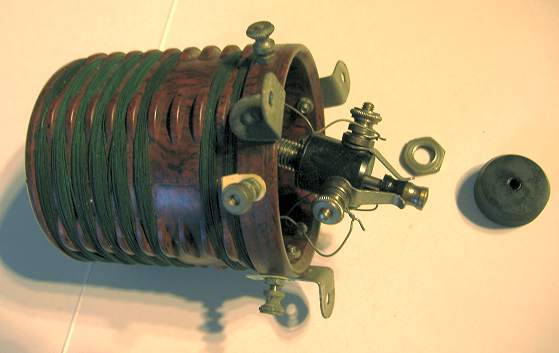 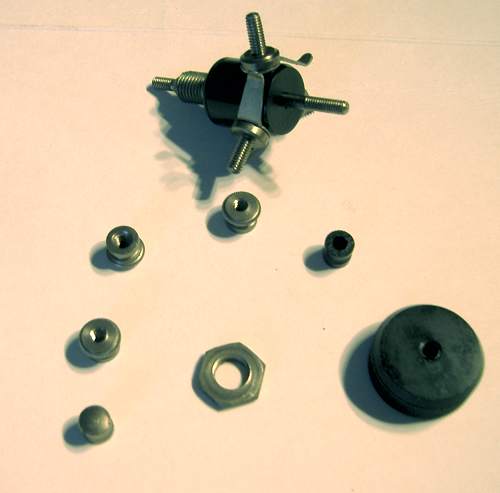 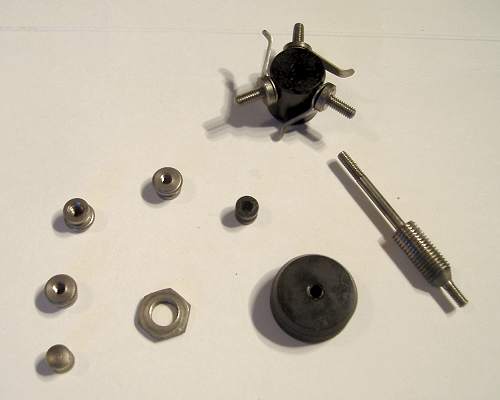 Now we can heat and hammer the innner shaft in outer barrel to free it.
Overnight soak in WD40 didn't work! 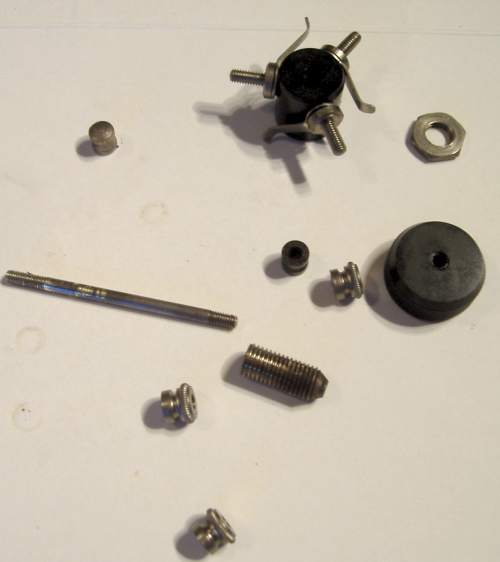 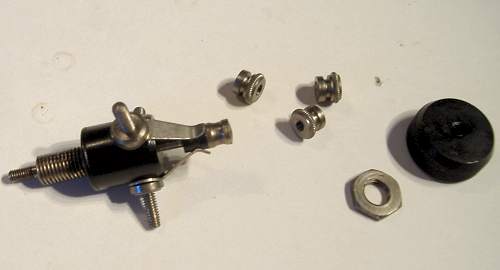 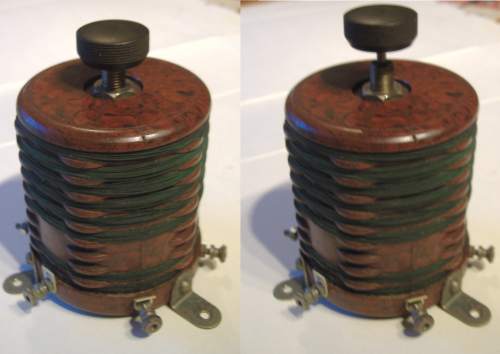 Four connections are labelled 3, 4, 5 & 6. Functions according to existing wiring:

Input from V1 anode via capacitor : 1

Pulling up the switch is MW and shorts 2 , 4 &  1, pushing down is LW. The unlabelled connections I have called 2 & 4 are obviously for front panel Wavechange switching along with 1 which is input via a capacitor. 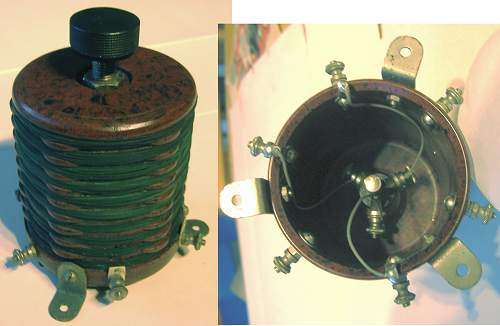 Aluminium (or copper, brass etc) screening cans would be very large as ideally the can wall should be spaced a radius out from edge of coil!

The wire appears to be solid single strand rather than "Litz" and cotton covered, cheapskates! Lovely  Bakelite formers. The layout isn't what I would have thought of! No wonder the Mullard "Wireless for the million" magazines usually show a simplified coil and note that wave band switching is omitted for simplicity of understanding the circuit.

With the coils "mapped" out a schematic is possible. So I have uploaded a sketch of it, I added missing earth on the C2 & C4 (large paper capacitors), swapped the side of HFC L10 that C4 was connected to and connected C3 to V1 anode. That was the three missing wires and one wiring error.

Unfortunately the Primaries on both "inter-stage" audio transformers are open circuit. These are very fragile and could have been burnt out by lack of grid bias. V2 HL210 "grid leak" resistor R1 is intermittantly 6M Ohm to open circuit (> 20 M Ohm), it's usually about 2M ohms.

The original ebay photos  of my unknown TRF (kit?) The two tuning dials are similar to those on 1928 Mullard kits. The third variable capacitor is likely "reaction"?  There is a third large transformer, possibly for a low impedance moving coil speaker as a reed type doesn't need a transformer. That also suggests 1932 /1933, earlier would be reed not moving coil usually.

April 1931 "Radio for the Million" has Pentode PM22 as an option instead of Triode for output on the "Conversion 4" and a SG PM12 for both RF stages. The driver is PM2DX. It's not really similar. That issue still promotes "reed" speakers.

For now we can only guess. But it's more like a "Magazine Kit" than a Mullard or Lissen I think and valves (tubes) and Loudspeaker arrangement too "late" for 1920s.

The reality after unpacking and a quick clean

I did take a lot of photos before even I cleaned it and also after simple brush and wipe but before any restoration. Third socket has pin 1 to large blue transformer. It has an Osram VS24K, not a pentode. This is a SG valve and there is no top cap wire. It's obviously the wrong valve.

Last socket is a Mullard PM2, its grid is fed from the big blue transformer and its anode connects to a terminal marked "Phones"

So I made a mistake, what I thought was a Pentode and output transformer was a SG (incorrectly fitted) with inter valve transformer and the other "transformer" is an RF choke for SG (V1) anode supply.

It's a late 1920s kit, 1 x SG and 3 x triodes, a common type of TRF with Regeneration. One valve is incorrect. A few wires are missing, but obvious where they should be. Though some companies and magazines publishing this kind of kit up to 1934. A mix of brands suggests a "home brew" rather than complete set of parts (two brands of mica caps, two brands of transformers).

The coils do have push-pull wave switches but they are siezed. It was easy to remove the switch on one coil, but extremely difficult to free the switch shaft. One switch is now working.

The two large paper capacitors are so leaky it shows on DMM Ohms range. The base is sealed with wax and card. It's easy to leave it intact internally but with wires snipped and fit a modern capacitor inside too. The others must be Mica, they are fine.

These do work, but a white plastic disc is crumpled up. It's blank! 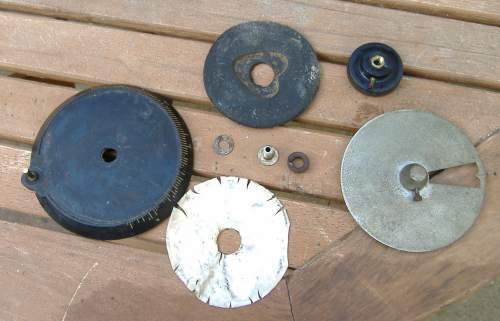 There is a thick rubbery pad between the fixed scale and the panel.

What is the white disc and associated window for? The rotating metal disc has a pointer to the outer log scale. The spring and washer load the knob on the edge of the metal disc for the geared drive.

Next is to "reverse" engineer what is connected. Either it was never finished or someone started to change it.  The coil connections don't seem quite right!  All the grid bias connections seem to be missing except the grid leak resistor on "V2" HL210