The model regular is part of the collections of the following members.

The model regular can be seen in the following museums.

Last week I picked up a cute Crosley 51. It had no case and needed a few repairs.

First off, the rheostat had a few open turns on the hidden side of the resistor wire. I removed the rheostat, cleaned the NiCr wires gently with a soft sand paper, and resoldered the wires. NiCr wire takes well to solder.

The set screw for the main knob is a standard sloted screw, but it's head broke off long ago, and the knob slipped. While attempting to drill out the remainder of the screw, the screw stub screwed itself right out, so I simply replaced it with a new half inch 6/32 screw.

The grid-leak resistor was open, so I hid a 1Meg resistor under the grid leak resistor, in the same socket. This value seemed to work well in my experiments.

I did most of the cleaning with glass cleaner and DeOxit on the wires and metal parts. DeOxit is a contact cleaner, but also works well as a metal cleaner.

I have a couple of 201A's that work in this set, but one is already in use in another set. So I decided to try some of the substitutes I built in the past.

I settled on this combination for use with a 3V "A" filament battery: 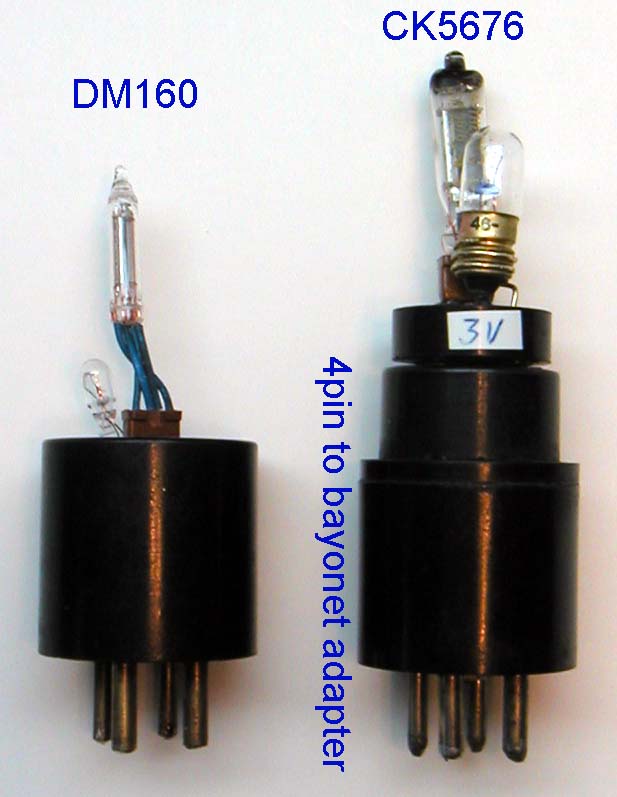 For the detector I used the DM160 with a light bulb in series with the positive end of the filament. The light bulb measures 20 Ohms cold and drops 1.8V of the external 3V "A" battery. Changing the Filament/bulb sequence changes the grid bias by 1.8V. Either configuration functions in the detector, but the higher bias current afforded by having he filament on the negative end of the "A" battery gave a more sensitive detection. The grid leak resistor is returned to the positive end of the "A" Battery.

For the Audio amplifier, I used a CK5676 triode with a #46 bulb (rated 250mA at 6.3V) in series with the negative end of the filament. Here, it is very important to place the bulb on the negative end of the 3V "A" supply, to give the cathode about 1.5V of of equivalent C bias. This variant of the Crosley 51 has the C terminal wired to the A- terminal, so the C bias is zero volts, except for the added 1.5V at the filament. Without this 1.5V bias, the audio signal gets limited or attenuated by grid conduction at the Audio tube. My tests showed up to 3V p-p at the grid from a local station, so the 1.5V bias was just enough to avoid conduction on the positive peaks.

The 1.5V bulb drop in series with the negative end of the filament raises the entire filament by 1.5V, which is the equivalent to lowering the grid by -1.5V. One think to keep in mind is that the audio socket filament is wired backwards with respect to the labels on the socket. The + terminal in the socket goes to the A-minus supply.

I got very lucky finding a suitable case. I wanted a case that would show inside the radio. I found a ready-made display case that was just the right size. Click to enlarge the thumbnail on the left to see measurement details for the case. The built-in mirrored back also helps show the tubes and circuitry. It cost around $30USD.

I broke and removed the front glass and cleared the tracks that held the glass to hold the radio. A pcb strip in the bottom track pushes up the radio to catch the top track. The left side track offers the best support.

The top and bottom sections of the display case are separate pieces that make it easy to inspect the bottom of the radio.

This photo shows the substitute tubes lit up. Note the green glow of the DM160 and the incandescent glow of the #46 bulb in series with the CK5676. 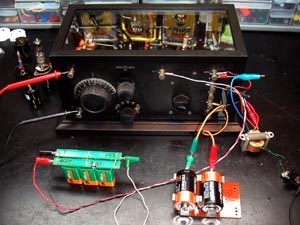 I conduted my tests with this setup. It comprises two D-cells for the 3V "A" battery, 6 NiMH rechargeable 9V batteries for the B+ 45V supply, with a tap at 22.5V for the detector. The actual voltage for each NiMH battery is 7.5V, not 9V. Check this post for more about battery packs.

There is also a 25k:4_Ohm transformer shown on the right for use with my modern set of head phones to judge radio sound quality independently of the the resonances of the period earphones.

The red and black leads on the left are wired to an external loop antenna. This antenna has 10 turns of wire over a 13 inch square form and has 86uH of inductance.

The series tuned LC circuit in the Crosley 51 works equally well with external wire antennas, or with loops. Loops have the potential for more selectivity and are more convenient to use than long wire antennas.

The variable capacitor and variable coil give a lot of tuning flexibility for external antennas. Just about any loop of any inductance can be tuned by this set. I found this set quite easy to tune. Each of the coil taps overlaps the band coverage by about 50%.

The tickler coil inductance is 81uH with a Q=40 at 1MHz. The following table shows tap inductance as the tap switch is rotated clockwise, from left to right.

I measured these inductances with the venerable Rhode&Schwarz BN6100. It gives Q and inductance at a particular frequency that is shown on the top scale. A simple calculation shown on the table gives a normalized Q at 1MHz. This intrument has been extremelly useful in learning about RF inductors. It can only measure inductors that it can resonate, so they need to have a minimum Q to be measurable. For example, the Q of Audio transformers is often too low to be measurable here, and the inductance of audio transformers typically exceeds the 1H maximum inductance range.

The following table shows the variable capacitor values as a function of knob rotation. I set the zero of the knob to coincide with minimum capacitance.

The dial only has markings up to 100 over a 180o rotation. The 150 value in the table indicates 270o. From this table, it is clear that I should rotate my dial position on the shaft by about 45o to make better use of he markings. No capacitance change happens for the first 45o.

While I was measuring inductance, I decided to measure the audio transformer. For this measurement, I applied a 10V square wave to the primary with a 1k resistor and measured the L/R time constant. The internal primary resistance is 474 Ohms and the time constant was 1.1ms this gives 1.474k*1.1ms=1.6H.

The audio primary to secondary step-up ratio was 1:4, so the secondary inductance is 16*1.6H=26H

I had not played with a regenerative set in a long time. I was encouraged by the good results I was getting with my small loop, so I decided to examine regenerative action closely. 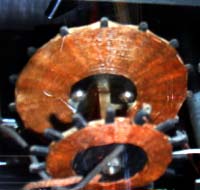 The out-most position of the tickler coil with the tickler knob pushed all the way in has some coupling, as we shall see.

The first photo sets up the measurement setings, and the second photo shows how much signal is at the detector grid when the power is off. This serves as a reference to assess the minimum regeneration that is possible with the knob all the way out.

The variable capacitor was carefully pre-tuned to the station before this measurement series. Only the tickler moves for ever tighter coupling from one photo to the next. 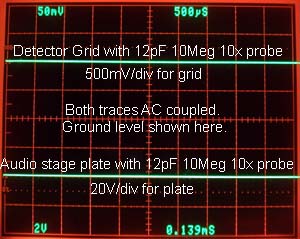 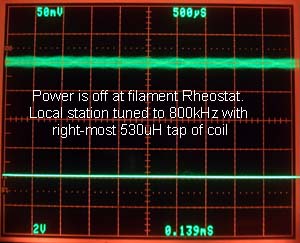 Turning on the power on the next photo made the audio signal appear as expected, and it also increased the signal at the detector grid. This proves that regeneration is present even in the most decoupled position of the tickler. The photo on the right shows maximum volume with some distortion, as the tickler was pulled in just below oscillation. Note that the RF signal at the grid roughly doubled, but the audio more than doubled. This shows that detection efficiency went up, along with an increase in RF gain. The increase of detection efficiency, more than the increase in gain, is the hallmark of regenerative detection. 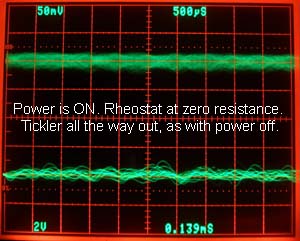 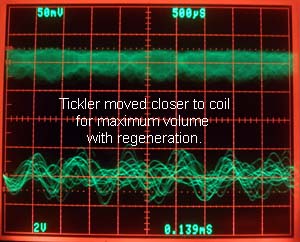 Now, the next photo shows a widening of the RF envelope that is caused by steady state oscillation in the detector. There is no beat note (whistle) because the oscillation is tuned to match the incomming frequency. The incomming signal also interacts with the detector non-linearity to keep the oscillation injection locked over a small range of tuning. The carrier portion of the envelope went up, and the audio output went down, along with a reduction in distortion. The photo on the right has more tickler coupling, and now a very obvious audio bandwidth widening could be heard. It sounds really sweet! 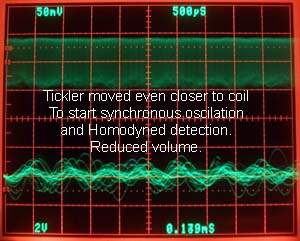 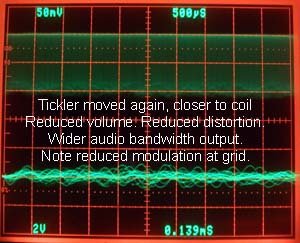 The next two photos show that increasing the tickler coil to maximum coupling does not cause a beat note, but simply continues the trend of increased carrier at reduced audio level. Note how flat the top of the envelope became, as the local oscillation increased. 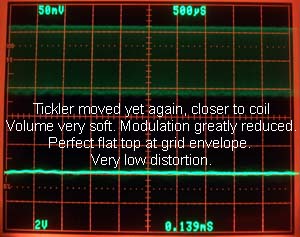 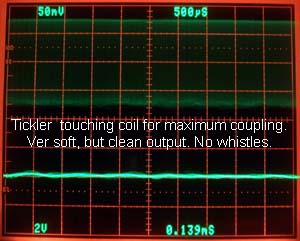 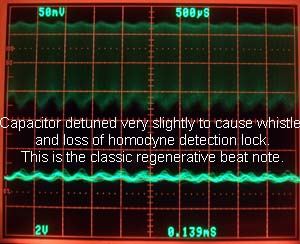 Lastly, detuning the capacitor slightly, produces the familiar regenerative beat note that occurs when too much regeneration is used, and the local oscillation is not locked to the incomming carrier frequency.

Homodyne reception is a form of synchronous reception. As such, it has several  advantages:

These 1920's sets were made without resistors, as we came to understand them after 1930, and few or no large valued capacitors. They were made from metal, glass, vacuum and insulators. Yet they never cease to teach me all kinds of interesting lessons.

It would be great to hear any interesting experiences with these 1920's sets, or with regenerative or homodyne detection. I also look forward to any comments expanding, correcting or improving the material of this post. 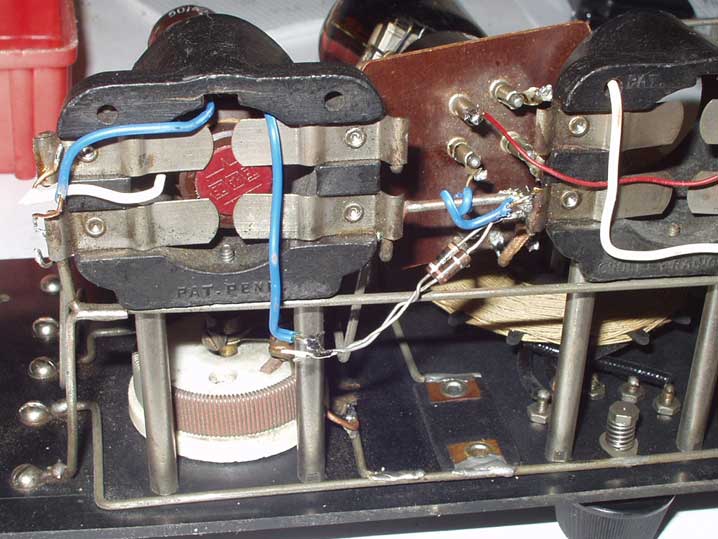 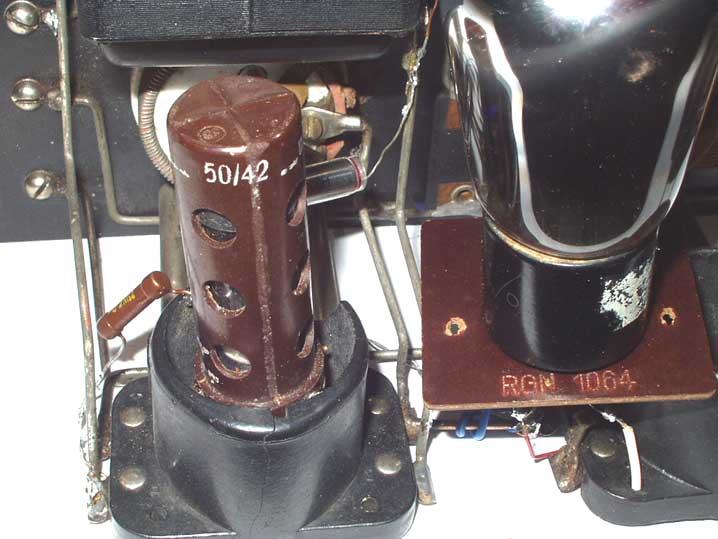 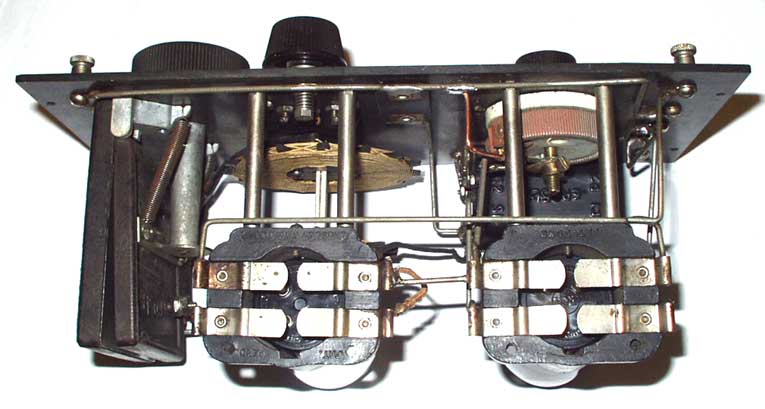 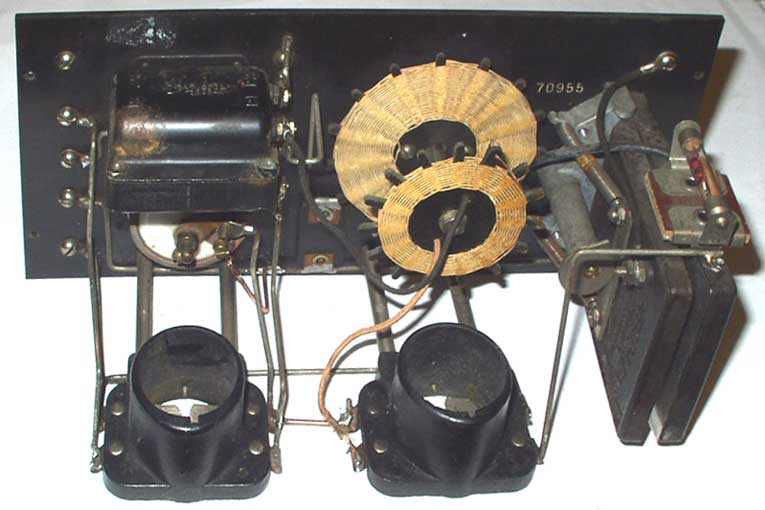 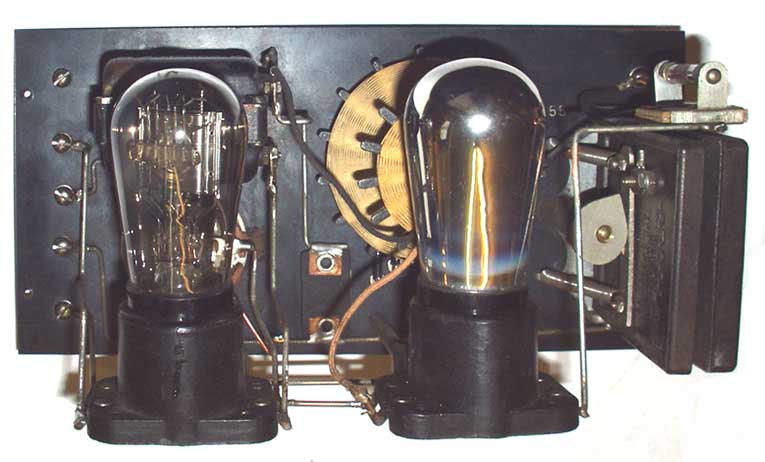