Forum contributions about this model: Grundig Radio-: 2540U

I have been restoring my Grundig 2540U. After replacing all the electrolytic and paper capacitors it was working but the volume would start out loud with full closure of the magic eye then after about 5 seconds the eye would open and the volume would drop down. Occasionally, when listening to FM for a while, the volume would suddenly increase for several seconds then drop down again.

My question. Is it possible that I cleaned the contacts on the PU/TR button by pushing it and exercising it? How are people cleaning the push button switches on these German radios since they are difficult to see inside of the switch box?

I wanted to upload a PDF of the schematic but can't.  If some one needs it email me zenith6@verizon.net

I have just restored a Grundig 2540U that has been in my extended family since it was bought around 1965.

Most of the restoration consisted in cleaning tube socket and switch contacts with Deoxit.

The power switch was stuck, but some wd-40 free it up, and it works fine now.

I thought I was all done, until the FM would come in and out,intermittently. It would get very soft, but not dead, then it would suddenly get loud again. 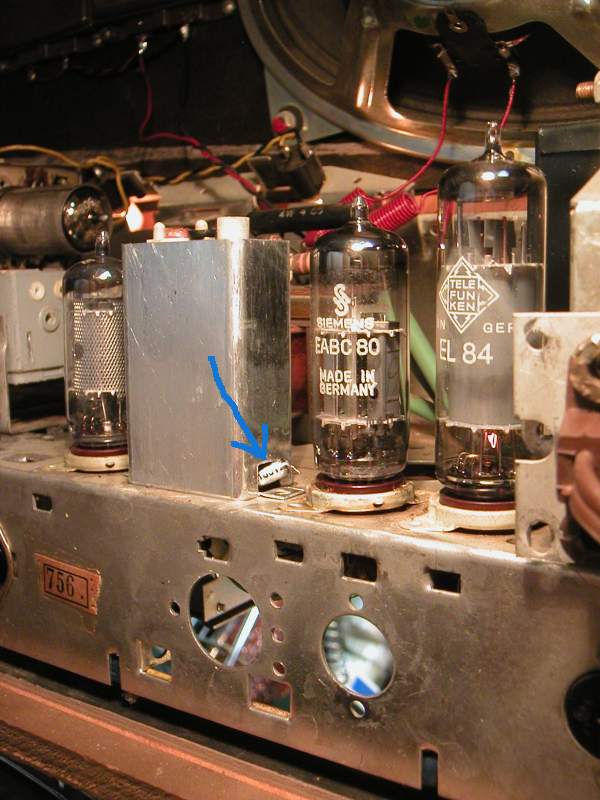 The 56pF 2.5% Polystyrene capacitor that resonates with the secondary of the Ratio transformer had developed an intermittent between it's tinned wire leads and the aluminium foil.

This cap is normally installed inside the Ratio transformer can, but was actually visible through an opening at the bottom of the can.

The cap is shown here with one leg already disconnected, and partly removed from the can.

I used a pair of long scissors to avoid taking the transformer appart to cut the cap end open.

After disconnecting one leg of the intermittent Polystyrene cap, I tucked it back in place, to document it as the original. 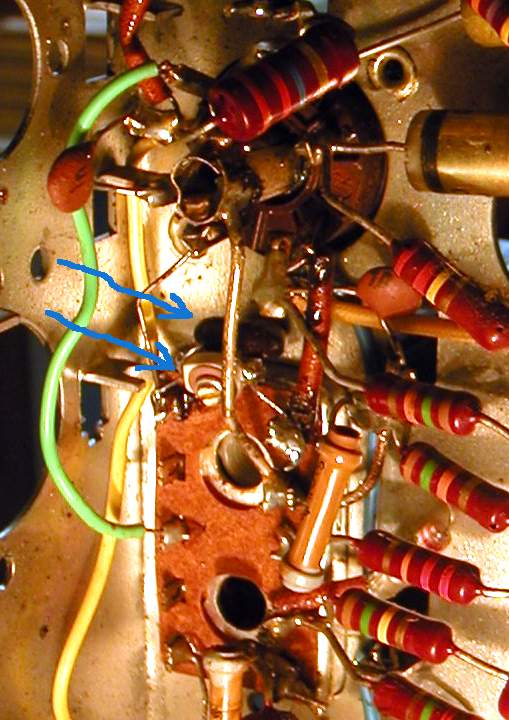 Then I added a 39pF mica capacitor and a NPO ceramic trimmer cap with a 5-50pF trim range.

The ceramic trimmer was soldered directly on the legs of the 39pF mica cap before wiring to the bottom terminals of the transformer.

I realigned the new trim cap by recentering the ratio detector voltage, which was very well centered when the polystyrene cap was working.

All three of these sets showed the same sporadic drop in FM output, that could sometimes be brought back by switching bands. The band switching would cause an electric spike that would bridge the connection temporarily.