The model Majestic is part of the collections of the following members.

I wish to clarify again - and I hope finally - That in my email to you I stated that SOME Grundig radios were sold in the US military exchanges  (the PX "post exchange" for US Army personnel; and through the BX "base exchange" for US Air Force personnel). However, the Grundig Majestic series Models "xxxxUSA" were NEVER sold in the US military exchanges any where. They were strictly imported into the US and sold through various outlets - and not SEARS!!  The items sold through the exchange only would be identified with the model number followed by the suffix PX.

If the same item was sold on a US  Air Force installation, it would still have the PX suffix - because the contracting was performed by the AAFES (Army and Air  Force Exchange Service).

I also know that there were concession stores operated on many of the larger US military installations, and in most of the concessions there could be some authorized Grundig sales outlets in which authorized personnel could purchase some of the Grundig products.  An individual could purchase a "domestic" (inland) model Grundig and return to the US with a Grundig model that was NOT available otherwise in the US.

Walter is exactly correct - the 7035WE or typically most any "WE-suffixed model" will not have the exact circuitry as a xxxxUSA model.

Respectfully,
Robert
This article was edited 30.Sep.06 05:16 by Robert Sarbell .

My Grundig Majestic 7035USA  radio  has two ganged tuning condensers, (capacitors) BC and FM . They are turned by the same tuning front panel knob via an intricate but individual dial cord configuration and what looks like a flywheel. The BC condenser turns freely with the front panel tuning knob but the FM condenser does not turn. Its dial cord slips.  In the pictures the FM condenser is .hidden under the tube and behind the wheel. Now I went and broke the BC dial cord. So I need the BC dial cord rewinding diagram and new BC dial cord and help in rewinding it. Upon more investigation on the slipping tuning FM condenser. I took the front glass plate off.  The fly wheel, which is turned by the front tuning knob, when it turns does not turn a disc that holds the FM dial cord on its shaft. In between the fly wheel and the disc is a kind of material. So what you have is the fly wheel then the material and then the disc. If I squeeze the three and turn the fly wheel the FM condenser turns. So for those who know this radio what's the trouble. Is that material worn? Are the springs worn? What do I have to do? Don't forget I need the BC dial cord also and arrangement diagram. 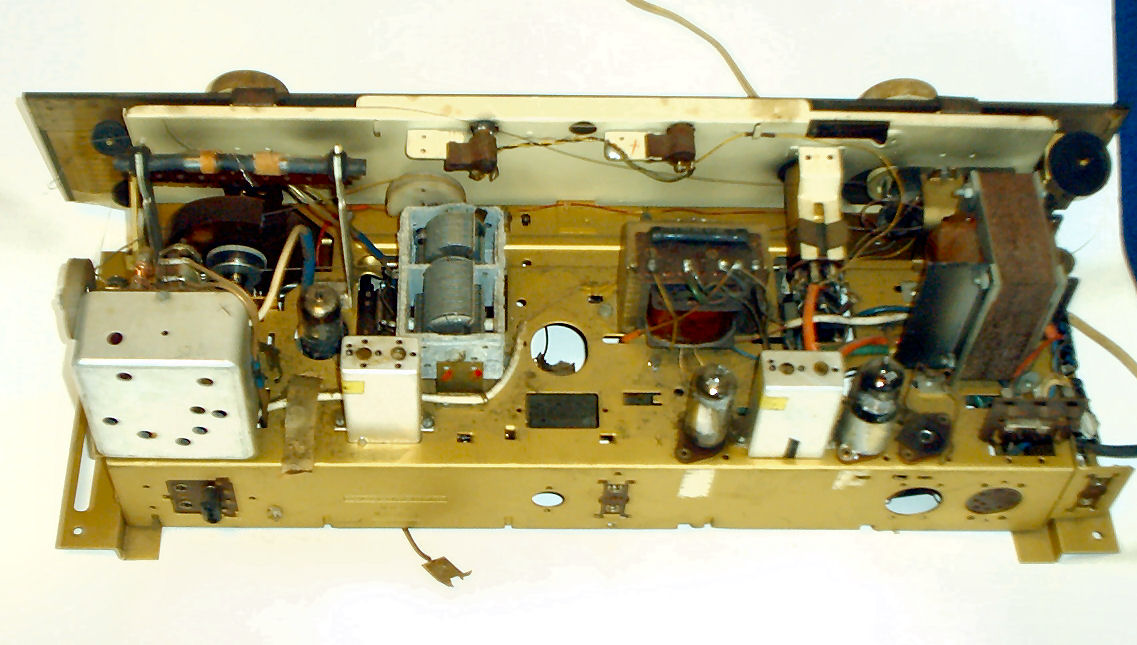 I originally asked for the schematic which I now have.