The model C All-Dry Portable is part of the collections of the following members.

The model C is interesting because in 1946 it uses octal tubes. But the 1947 Model C/A and 1948 Model C/E (External aerial / earth connection option) both use the B7G tubes (7 pin miniature valves). Interestingly these tubes were released by RCA in 1939 and used in many US "personal" radios in 1940 before the US entered WWII.

The Model C Family, Unique in Ever Ready Development?

With its use of perspex and curvy lines it is a huge departure in style from the earlier Model A (the first post WWII set from Ever Ready) and indeed earlier Lissen / Ever Ready sets. To understand the logic and development we need to look at some history.

Summary history of Ever Ready and Lissen up to 1949

Ever Ready in the UK was formed by the parent US Ever Ready (later Eveready) selling BEREC (the British Ever Ready Electrical Company) around 1906. The UK Ever Ready later uses the BEREC brand as "British Ever Ready Export Company, which mostly rebadges Ever Ready sets (there are perhaps three BEREC only sets, the J aka Saucepan, Pioneer and Fiesta).

Lissen was formed by Thomas Noah Cole probably using money from his wife Rebecca (or her family) as she is the major shareholder. By the time he has three factories in London in 1928, Ever Ready buys control for £1 Million. T.N. Cole was to remain as Managing director and not compete for ten years. But around 1934 he creates Vidor and buys the existing Burdept Radio using a proxy Managing Director. Obviously there is more to this story, which is documented elsewhere. So though Ever Ready had reduced shareholding in 1934 or 1935 they buy total control again.

So this explains why Ever Ready branded models appear from 1935. But they are all made in the London Lissen factory, not any Ever Ready factory and are mostly (all?) rebranded Lissen models. Lissen at this stage is still a separate company (not wound up till 1948) and wins the contract to supply the Ever Ready 5214 sets to the BEF in France and then the Forces Entertainment Portable set. These were probably based on the Lissen 8514 or 8515 which used Side Contact valves. Early 5214 used side contact and gradually change to Octal types.

So the Lissen factory at Islington was still in production at the beginning of the war, when it obtained a Ministry contract to assemble and repair "Comfort Sets" for the armed forces. All Ever Ready Radio production was thus at the Lissen works in Islington, North London until it was destroyed by air-raid bombing in earlier part of 1941. Initially manufacturing began again at Amersham, Buckinghamshire,.  The need for new premises was urgent as Ever Ready had several government contracts to produce radio sets, including the Armed Forces 'Comfort Set'. But but the buildings were too small and unsuitable for this kind of use in the temporary premises  at Amersham, Buckinghamshire, Space was found initially at Ever-Ready's Canal Works so another move in 1942 for further expansion was required to the firm's main battery works at Park Lane, Wolverhampton in the heart of England's "Black Country". Lissen was  voluntarily wound-up in December 1948

Thus  Ever Ready  in 1941 starts production of Radio sets for the first time. Perhaps production of Edge contact tubes (valves) ended in 1941, if Lissen had been making them, certainly that production ended.

Although the radio division was now based at Ever Ready's largest dry battery production works it retained full autonomy and, after the end of WWII, was responsible for a range of unique radio receiver designs, all sets except the Personal B.

The B7G tubes (7 pin miniature valves) were imported and used in at least two UK produced covert receivers during WWII, a pocket sized superhet (for Poles) and a 3 x 1T4 regenerative TRF. Proximity detectors in bombs could use up to 250,000 tubes in one RAF raid. 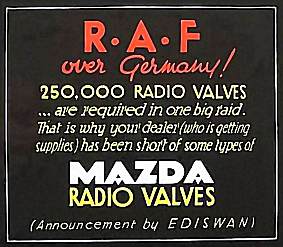 First Post WWII Ever Ready Radios of the 1940s

The Model A is really a revamped 1939 Ever Ready 5214 (really Lissen 8514) which as the Forces Comfort set and late model 5214 has Octal instead of Edge Connect. Was it called "A" because it was made in Block "A" or the first "really" Ever Ready Model? Prior to WWII from the point that T.N. Cole left in 1934 / 1935 till 1940 the Lissen Models are numbered 80xx to 85xx. Known Ever Ready equivalent models 1935 to 1940 run from 5004 to 5347. The 1939 5214 appears to be the first with a name "All Dry Battery Portable". Were any Lissen models other than the Ever Ready branded Government Contract models made after the Islington, London factory was destroyed?

The post WWII models start with sequential alphabet letters, A, B, C, H, J, K. The C/E occasionally referred to as an E, but this could be a later error. The first Post WWII Farm set is the Model T of 1950 which is simply a model "K" in a Table cabinet. The 1951 "briefcase" style Model N is the last new model with simply a letter designation, The 1955 N3 is the N adapted for Dx96 tubes giving double LT battery life with revised drive cord and metal panel. There was a revised version of "J" adding MW, but year is really unknown. There is no evidence of D, E, F, G,  I etc or an N2, though the 1953 Ever Ready Skyscraper is also referred to as an L26 (no connection in design or case tto the pre war Lissen Skyscraper). There is a completely different BEREC Skyscraper which is export version of an Ever Ready Spacemaster (The only "sky" prefix BEREC). All the rest are Sky prefix.

The Model J may not have been sold under the Ever Ready Brand, but may be the first set sold as a BEREC. Though listed as a maker on RMorg, BEREC was just an Export Sales organisation. Some sets are simply rebranded Ever Ready, some are modified and a few like the Model J are made for export only (later J, Fiesta and  Pioneer)

Sylvania in 1938 was the first to release the 50mA 1.4V filament octal tubes that made an all dry portable feasible. The edge connect types seem similar. RCA released the original B7G tube line up in llate 1939 / early 1940. The DK92 and DL94 (not pin compatible with DK91/1R5 or DL92/3S4) released in early 1950s during the production of Model K and Model T. Philips released the entire Dx96 tubes by 1953 allowing the Sky Queen to use 1/2 the LT current of the then almost identical DK92, DF91, DAF91 and DL94 T and K chassis (pin compatible).

The second Transistion is the Model C (octal) to the Model C/A and C/E B7G 7 pin miniature type on essentially the same chassis.


All the 4 revisions of the two C/A and two C/E are minor tinkering with the circuit. If there was no external aerial/earth option on C/E, it wouldn't actually be a separate model in reality to the C/A as many models have small circuit revisions during life. Some are even recommended as changes to do if a set comes in for repair. All three of these models have the same case and sequential serial numbers.

The 1940s 50mA B7G tubes may have been Nickel filament. The 1953 25mA Series from Philips used tungsten again. More about the 7pin miniature tubes.

Some thoughts  on the changes on C/A and C/E

The layout isn't ideal. There are several stability issues!

V4 DL92 control grid "stopper" (o/p tube) no C/A all C/E:
Connecting V4 g2 to HT increases the gain a little, especially with fresh battery (100V approx). The layout was for larger Octal tubes. So ALL the C/E models add a "grid stopper" not on the earlier C/A.  The 2M2 Ohms series resistor on grid isn't on any UK chassis designed for B7G tubes (i.e. any later Ever Ready). Presumably It wasn't on the 10075 to 125185 models (later C/A) as it took a while to notice that the screen grid change made the set less stable. I managed to get my C/A (It's the later one with the direct g2 to HT) to oscillate!

V1 oscillator section supply decoupling added no C/A all C/E:
The C/A all power the pseudo triode oscillator (DK91 g2 screen grid)  primary coil is direct from HT and use 68K on the V2 IF screen Grid decoupled with 10nF. On all the C/E the g2 primary coil is fed via 2k2 ohms (damping resistor) from the V2 (DF91) IF amp g2 supply, which is accordingly reduced from a 68K resistor to HT to 10K. This technique of powering the oscillator is common on all later B7G UK sets, often with no damping resistor. Some sets switch a damping resistor across the secondary of the oscillator coil for MW and the capacitor for LW.    Indeed this model will have highest oscillator drive at 1.6MHz and much lower drive on LW. If the C9 HF end L.O. padding is opened too much and the radio tuned past 1.5MHz or higher frequency it changes oscillation mode and frequency to become a small transmitter! It's OK when correctly aligned.

Loop aerial and LW loading coil swapped and extra switch on the C/E vs earlier C/A
Well the C/A (earlier arrangement) saves a switch as the C2 LW HF end RF padding is decoupled by AGC capacitor and on MW the LW loading coil between AGC line and loop aerial is shorted out.  Why did they change this on the C/E?  The C/E has a loop with an aerial and earth socket on the rear panel. There is going to be better LW performance and less detuning of LW, I think, if the LW loading coil is on the V1 (DK91) signal grid side of loop frame aerial rather than the "earthy" AGC line side. (the bias/AGC is to grid via the coils). Then there are two switches needed, one to short out the LW loading coil (MW) and one to add in C2. Physically it's likely a single change over switch and no real difference in cost. I will examine my C/A later to see is it in reality the same switch as used on the C/E but just wired different.

(With thanks to Wolverhampton Historical Society, Grace's Guide and Wikipedia for some of the background history on Lissen and Ever Ready).