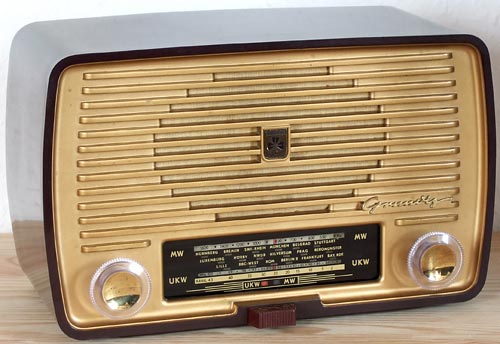 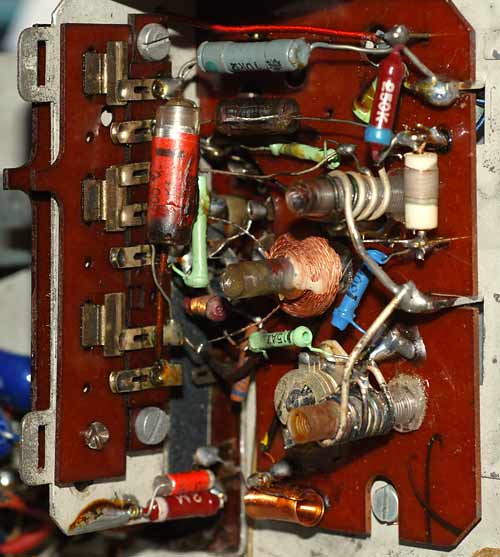 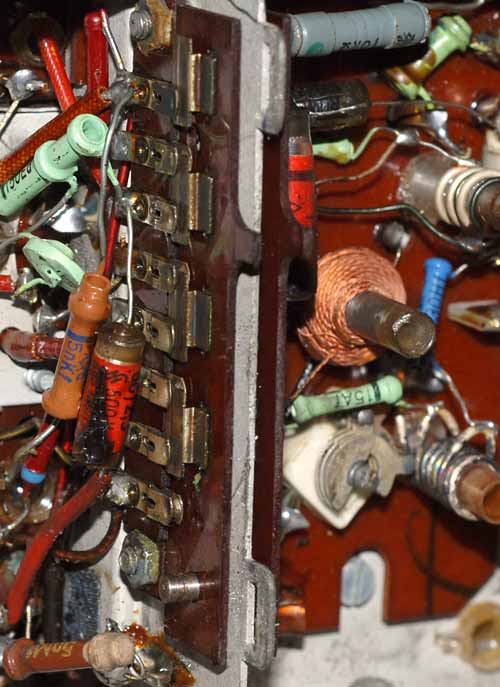 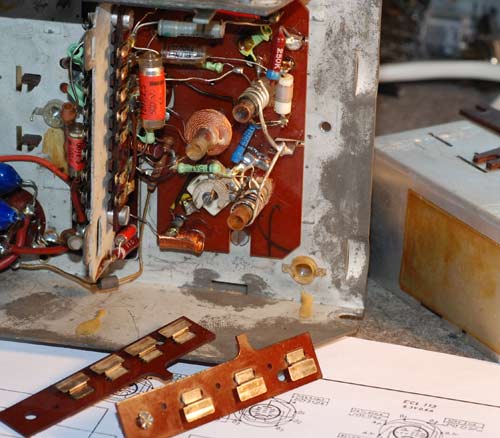 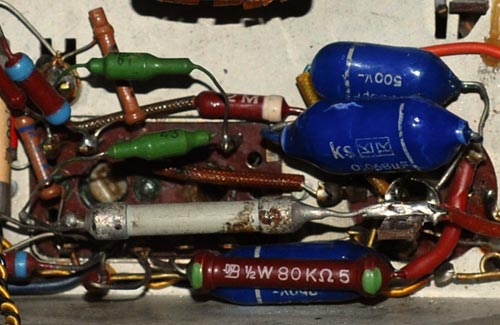 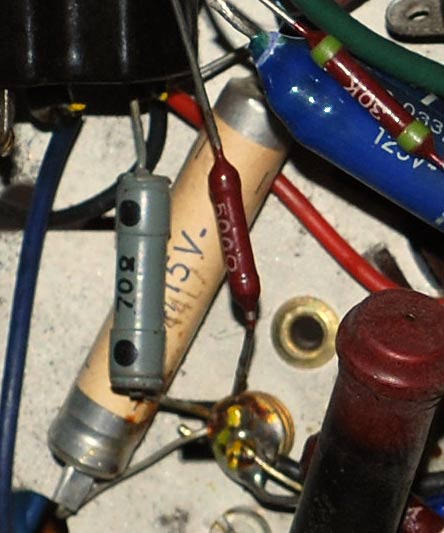 This wonderful post was one of the first I ever read in the RM Forum, and it remains one of my favorites.

I own one of these Grundig 80U wonders that was given to my by Ross Hochstrasser.

This particular set was quite far gone originallly, with missing speaker and power transformer, but I got it fully functional again.

This is one of the radios that I like to listen to in my home lab. Soon it became clear that it had two stability problems. The first problem was the audio cutting in and out. This was traced to a loose socket for the ECL113 power pentode. Thightening the holes gently with a fine screw driver solved this problem.

The more difficult problem was the classic warmup drift that is so common in many FM radios, but not so common in Grundig tuners in good working order.

First studied the self-oscilating frequency converter to look for parts that might be drifting. The oscillator operation turns out to be quite simple.

This schematic shows the front end operating in FM. I took this from a Funkschau article that introduced this radio in 1955.

The self-oscillating converter  at tube II has the frequency setting tank circuit in the plate circuit, but it is driven with a relatively small 15pF capacitor into a low coil tap . This low tap is enough to deliver energy for oscillation, but is sufficently decoupled from the resonant circuit, such that it does not affect it's frequency strongly.

The secondary of the tank circuit feeds the grid circuit, which is also loosely coupled with a step down from the overall resonant tank. So there is very little to cause frequency drift.

When I varied the mains voltage from 120V down to 90V there was no noticeable frequency drift, unless I waited for the temperature to change. This showed very good supply rejection in the oscillator design.

I started to suspect that a mechanical expansion might be causing the drift.

I removed the tuner cover, and noticed that the frequency shited by a few hundred kHz. This alone was very suspect. 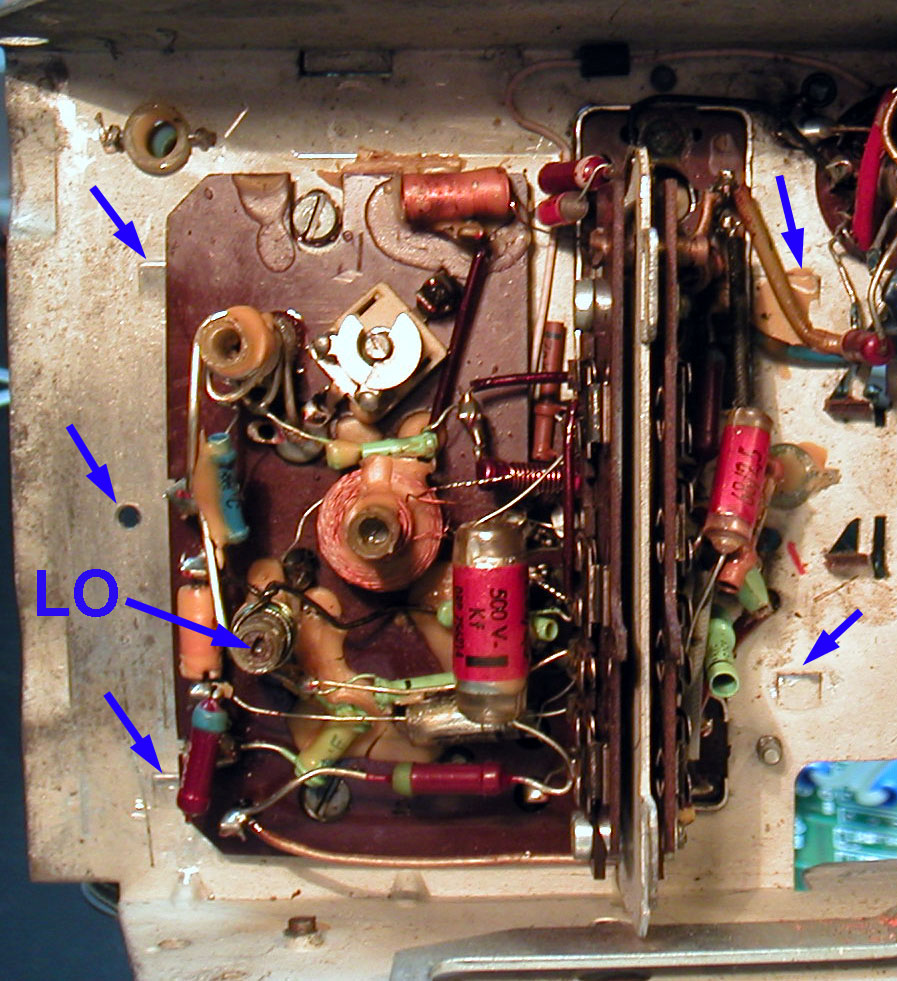 The self-oscillating converter tank coil is marked in this photo with "LO", and it sits very close to the tuner cover.

I applied pressure with a plastic rod to various points of the phenolic board, but there was little effect on station drift.

I had noticed that the tuner cover did not sit very thightly. It was held down by only one screw on an aluminum tab, to the left of the LO coil, and by a couple of cleats on top of the cover. The screw hole is just above the word "LO".

Four arrows point out raised tabs in the chassis that make contact with the tuner cover. I cleaned the oxidation away from these raised tabs. 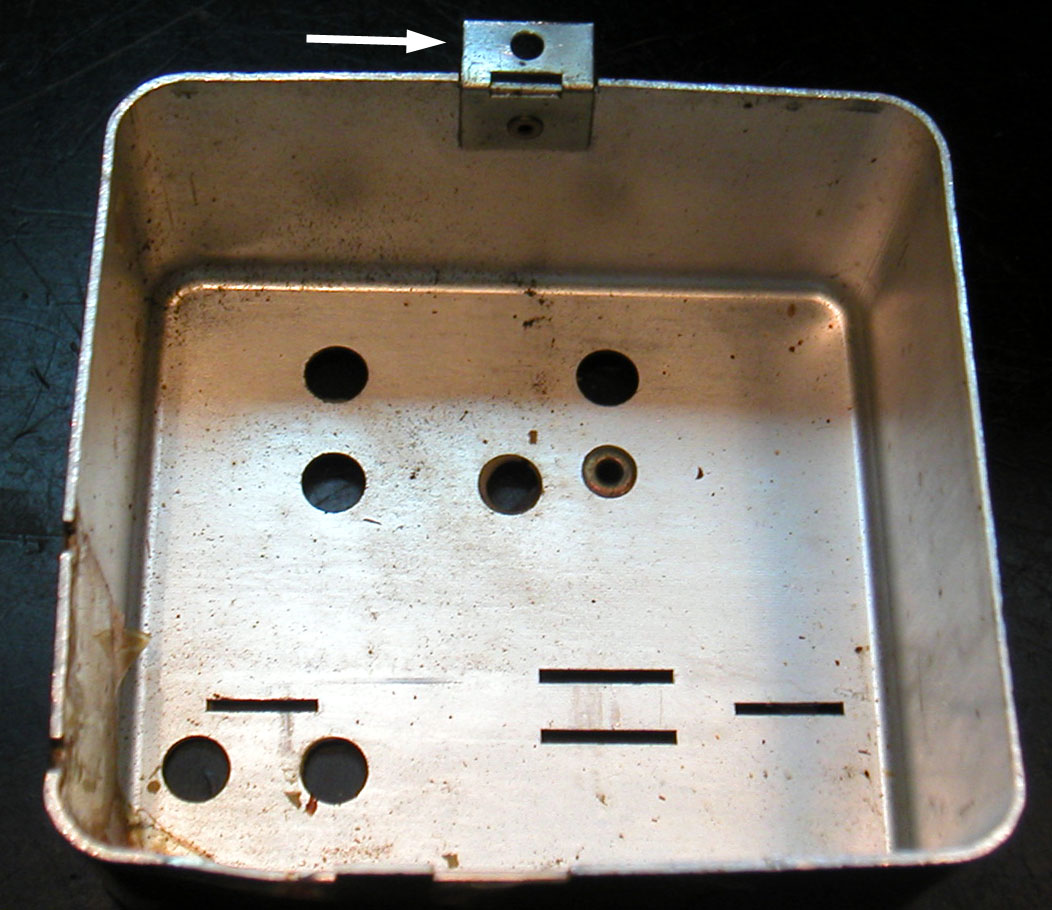 The single aluminum tab that holds down the tuner cover on the sensitive side near the LO coil is easily deformed. I straightened the tab with a pair of flat pliers. 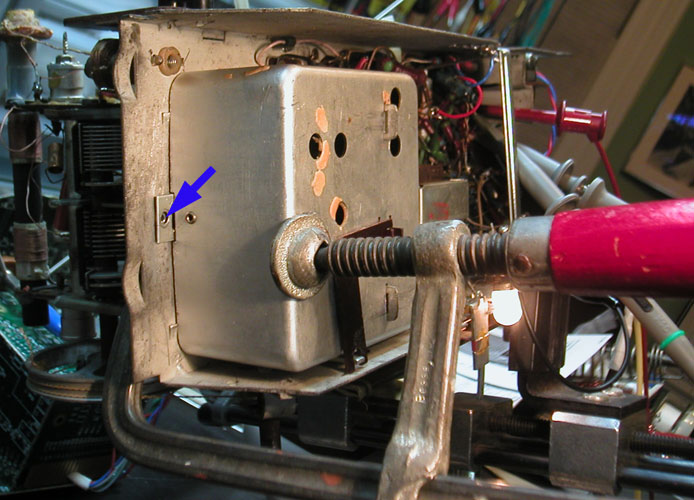 Then I carried out an experiment where I played the radio for a half hour with a clamp to force a good contact btween the tuner case and chassis, as well as good mechanical stability.

The arrow points out the single tab that normally holds down the case on this side near the LO coil.

There was no drift during the half hour of radio play. This is what I wanted to achieve.

I monitored the drift on the center-channel tuning meter I installed in the original restoration. (The meter works the same way that is recommended during most alignment procedures, at the output of the ratio detector, in a bridge arrangement).

I noticed that I could cause drift simply by pushing with my finger on the side of the tuner box near the LO coil. Later tuner box constructions, as can be found in the Grundig 87U, that was designed by our own Hans Knoll, were much stronger with three screws holding the box very rigidly. I wake up every morning to the sound of this radio, and there is no FM drift at all. I have the Grundig 87U radio plugged into my alarm clock. It was the stability of the 87U that made me expect similar performance from the 80U.

The final solution to the drift problem consisted in straightening out the tab and replacing the orignal smal headed sheet metal screw, with a machine screw washer and nut. The larger washer was particularly important to apply pressure over a wider area of the tab. 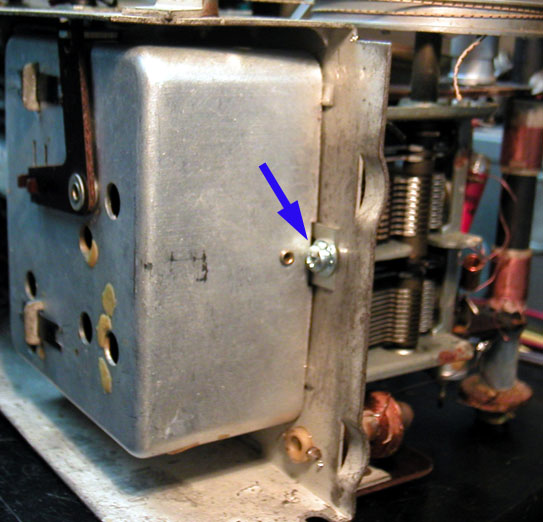 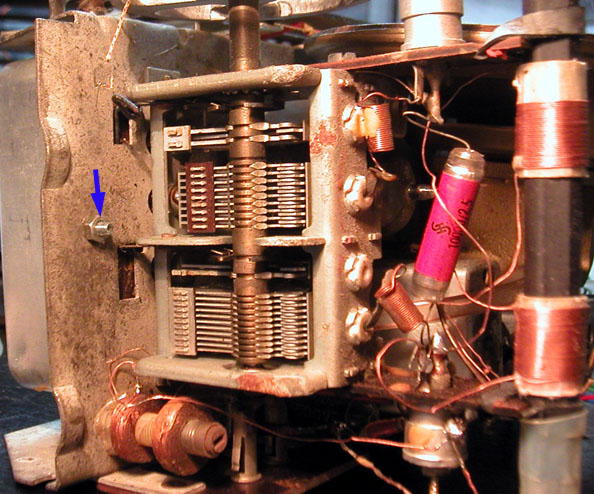 Now I turn the radio on in my home lab, and listen without having to adjust the tunning control after the radio warms up.

Shielding, IF bandwidth and AFC

Thank you for your kind words, and for the further explanation of the mechanical drift problem. I did not realize that internal partial shields were used later to protect the LO from mechanical drift.

I must say that I have learned a lot from you and other members about the operation of these radios. I don't think I would have been competent to solve this problem a year ago.

It was only now that I understood the meaning of a statement in Bernhard's original post:

The wide bandwidth (?) at the 1st IF filter (secondary) is due to the high circuit capacity of 150pF (C35), which is quite low. Since this capacitor is also used for the VHF-HF, to ground G1, it can not be smaller. This is the reflex-compromise ...

The lesson I draw from this is that the 150pF capacitor gives a relatively low impedance of 311 Ohms at resonance. The plate resistance of the ECC85 should be around 20kOhms as an oscillating converter in the Philips data sheet. This limits the Q to 20k/311=64 and the bandwidth should be 10.7MHz/64=167kHz. This assumes that the internal IF tank losses are negligible, when compared to the triode plate resistance.

On it's face, this 167kHz bandwidth seems nearly ideal for a +/-75kHz deviation. But in a radio with a pentode IF, the selectivity per stage is often  sharper. The flatness of the IF bandpass that is required for +/-75kHz deviation, is regained in alignment by staggering the tunning of each stage for flattest response.

The IF common cathode configuration for triode I requires Miller feedback capacitance neutralization that is accomplished by  C18=64pF in combination with C15=150pF and plate signal scaling capacitors 800pF+5nF.

I remember in another post that Hans mentioned additional positive feedback being used to increase plate resistance at IF frequencies around the common cathode triode in later models, so a higher gain and selectivity could be achieved. I can't remember what post it was, but the lesson stayed with me.

I have a suggestion for my fellow radiophiles: When you see a radio with an AFC button or an AFC circuit, you should not think that it is a better radio because it has the additional feature of AFC.

You should think that the original design engineer did not know how to design a local oscillator that did not drift. This happens even with top-of-the-line designs.

You should always have greater respect and appreciation for a radio that has no AFC and does not drift, like most Grundig FM radios.

Positive Feedback at IF

I just remembered where I saw Hans' reference about using positive feedback to increase triode gain.

It was in post 6 of Part 2 in the historic analysis of the Grundig 5040W/3d. This link is for the English version, and there is also the original German Language version at Schaltungsanalyse 5040W/3D 2. Teil

Another reference is closer to this particular radio, in the Funkschau article translated in English. The following was extracted from the article:

"The first 10.7-MHz band-pass filter lies in the
anode circuit of tube system II. A feedback
loop for the IF including 1.2 nF and 130pf
capacitors increases the internal
resistance of the ECC85-II. The secondary
of the IF band pass filter is connected to
the grid of the ECC85-I, where the IF is
amplified. In addition to the voltage
divider of 30pf/1.2nF, choke BV1976
and the 130pf condenser form a wave
trap for the IF in order to eliminate any
IF behind the ECC85-I."

The component references apply to to the schematic "Bild2" shown in post 5.

After going through the calculations about the low IF L/C ratio that I discussed in my previous post, and considering the gain limitations of the ECC85 with a mu=57, the ultimate performance limitation of this implementation of the Reflex technique should be the total gain that can be safely realized without oscillation, as compared to the gain that can be realized by a Pentode IF stage and Pentode mixer.

The broadband positive feedback that increases triode output resistance, so that the maximum relizable gain exceeds the mu of 57, has to be carefully controlled to avoid oscillation.

If the total signal that is applied in positive feedback form is 80% of the input signal of the stage, the net realizable gain will go up by a factor of 5. The challenge is to keep the 80% figure under control. If it goes over 100%, you have oscillation. Excessive positive feedback also starts to exagerate the filtering contribution from blocking or bypassing capacitors and inductors in this postive loop, so that they will affect the net frequency response. 80% is a hipothetical figure for illustration. I don't know how much positive feedback is applied here. It could be measured by looking for the change in IF gain when the feedback path is shorted out. It could also be calculated from the component values in the schematic.

Positive feedback is very frequently used in modern analog integrated circuit design. Sometimes I am quite happy with feeding back just 66% of the output to get a 3-fold increase in my analog IC designs.